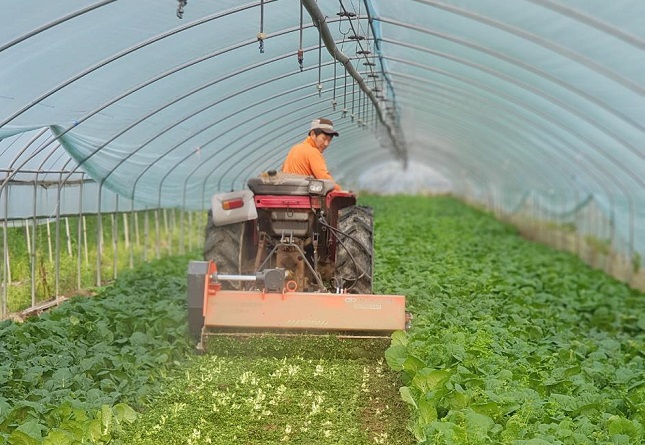 This photo provided by Koh Jin-taek, a farmer in Ansong, Gyeonggi Province, shows the destruction of farm produce in July after the tradable vegetables could not be harvested due to a labor shortage.

ANSEONG, Oct. 17 (Korea Bizwire) — Koh Jin-taek is proud of having built a small but stable farming business in Anseong, 77 kilometers south of Seoul, over the past two decades producing primarily lettuce, chicory and other types of leafy vegetables.

He currently owns 44 vinyl greenhouses and had supplied nearly 10,000 kilograms of produce monthly to food companies, with annual sales climbing as high as 800 million won (US$680,000).

Koh now has become increasingly doubtful of whether he can maintain his business going forward.

“We have to supply at least 9,000 kg of vegetables each month to break even and save some money. Last month, we were only able to sell 4,800 kg,” Koh said.

One of the main reasons for such difficulties is the shortage of affordable labor.

The pandemic led to a sharp drop in the number of migrant workers in South Korea, driving up their wages. Koh’s once nine-person workforce was recently slashed down to five as four abruptly left for higher paying jobs.

South Korea runs three types of migration labor schemes under which workers from 16 Asian countries are allowed to work in fields of low-skilled manual work, such as fishing, farming and manufacturing under E-8, E-9 and C-4 visas.

The programs are intended to provide local farmers with cheap labor while offering comparatively high wages for overseas workers who would have earned much less for the same job back in their home countries.

In 2019, nearly 9,000 workers from Asian countries, including Cambodia, Pakistan, China and Bangladesh, were hired here through the program.

But due to strengthened border control against the pandemic, the number plunged 82 percent to 1,590 from January to August of this year.

This continued shortage of migrant workers is creating a supply-demand imbalance of farm labor, leading to a surge in hiring costs. 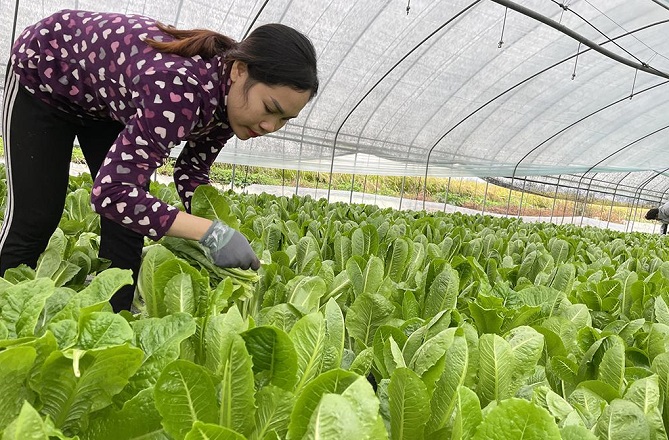 Sreychom Mao, a 30-year-old migrant worker from Cambodia, harvests lettuce at a farm in Anseong, Gyeonggi Province, on Oct. 15, 2021. (Yonhap)

This phenomenon came as the local farming sector is dependent on foreign work more than ever. Young South Koreans are increasingly shunning manual labor, such as farming and fishing, and choosing to live in cities with higher-paying jobs.

Koh says he finds himself constantly checking his savings to see whether he is able to shoulder the sharp increase in labor costs due to the shortage of migrant workers since the pandemic.

The fast aging of the farming population isn’t helping either. Last year, people over the age of 65 accounted for 41.7 percent of all farm households, up 3.9 percentage points from 2015.

A large number of anecdotes suggest that workers who arrive in South Korea are reportedly offered as high as double the daily wages as those before the pandemic.

Koh said his town’s agency that matches farmers with migrant workers recently increased the daily wage up to 120,000 won from 80,000 won.

Koh said he had to destroy 30 vinyl greenhouses worth of goods this year. He simply was not able to harvest the perfectly tradable vegetables due to the labor shortage.

Rep. Ahn Ho-young of the ruling Democratic Party, a member of the parliament’s labor committee, pointed out in a recent government audit session that the steep hikes in costs are driving local farmers to resort to employing undocumented workers. 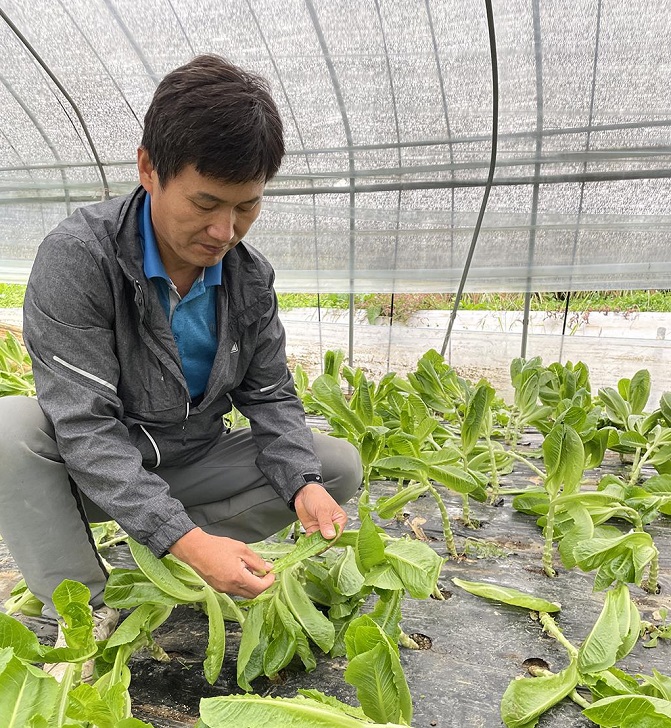 Koh Jin-taek, a farmer in Anseong, Gyeonggi Province, checks the condition of his romaine lettuce crops at his farm on Oct. 15, 2021. (Yonhap)

On the consumer side of things, the labor shortage has ended up weakening the overall output of farm produce. This has led to hikes in food prices and has added inflationary pressure to the economy.

In the second quarter, South Korea ranked third among members of the Organization for Economic Cooperation and Development (OECD) in the growth rate of food prices.

Despite seeing higher wages, migrant workers themselves too aren’t necessarily welcoming of the situation.

“Work is more difficult and time consuming as we are constantly understaffed,” said Sreychom Mao, a 30-year-old worker from Cambodia.

Some farming communities are demanding that farmers be included in the government program that compensates small and midsized businesses for damage caused by adhering to social distancing rules.

To help out, most counties across the nation offer support, such as discounts for renting farm equipment, while some also send their employees in groups to local farms to help out with the manual labor.

But such peripheral actions are nowhere near the amount of help and attention farmers are requesting.

Koh hopes that the central and local government can offer subsidies so that farmers are able to hire South Korean workers, even if higher wages have to be offered.

“If the government provides support, local workers might make the effort to come here,” Koh said.

Farmers will be left with nothing if the financial burden of employing local workers is put solely on farmers themselves, he said.