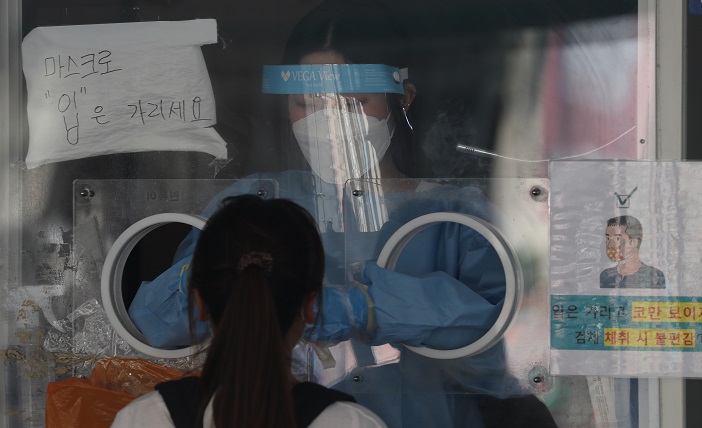 A health worker in protective gear collects a sample from a citizen at a makeshift virus testing clinic in Seoul on July 28, 2021. (Yonhap)

The country added 1,896 COVID-19 cases, including 1,823 local infections, raising the total caseload to 193,427, according to the Korea Disease Control and Prevention Agency (KDCA). The daily number was up 531 from the previous day.

It was the largest daily caseload since the country reported its first virus case on Jan. 20, 2020, breaking the previous record of 1,842 tallied last Wednesday.

Later in the day, health authorities and local governments said 1,514 new cases were confirmed from 12 a.m. to 9 p.m. Wednesday, down 198 from the same time the previous day.

Of the total, 1,013, or 66.9 percent, were reported from the greater Seoul area, including 495 in the capital and 425 in the surrounding Gyeonggi Province.

The daily caseload has remained above 1,000 since July 7 due to the resurgence in the greater Seoul area. But recently, cases in non-Seoul regions have been growing amid increased activities in the summer vacation season.

In their fight against the fourth wave of the pandemic, health authorities also worry that the virus curve may not have reached its peak yet, as the highly transmissible delta variant of COVID-19 is becoming the dominant strain in the country.

To stem the spread of the virus, South Korea extended the highest distancing measures of Level 4 in the Seoul metropolitan area for another two weeks through Aug. 8.

The toughest distancing restrictions ban gatherings of more than two people after 6 p.m. and place a 10 p.m. curfew on restaurants and cafes, and a ban on nightclubs and other entertainment venues.

The country will also enforce Level 3 distancing restrictions in the non-capital areas through Aug. 8, though some municipalities have adopted Level 4 measures to better contain the virus.

Under Level 3, cafes and restaurants can accept customers until 10 p.m., and only takeout and delivery services are available after that time.

Private gatherings of five or more people are banned, while mass-gathering events must accommodate fewer than 50 people.

The KDCA said the population movement in the past week, which is based on mobile GPS data, rose 0.8 percent from the previous week, with the capital area increasing by 1 percent.

Compared with the first week of January, movement increased by 28 percent.

Health authorities said they will review a plan to implement stricter virus curbs if current distancing rules do not seem to improve the country’s virus situation. 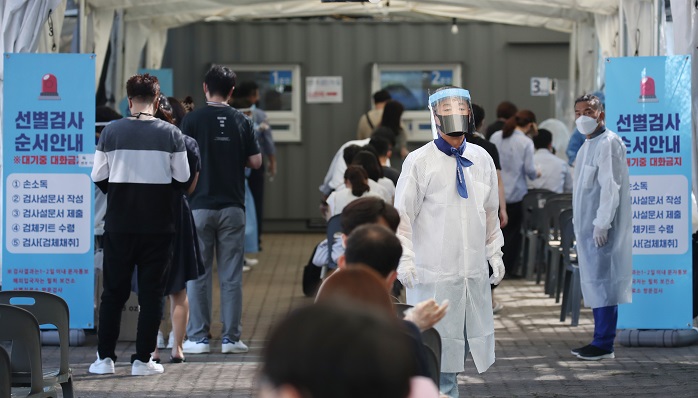 A health worker in a protective suit guides citizens at a makeshift virus testing clinic in Seoul on July 28, 2021. (Yonhap)

The government said Moderna will resume its vaccine shipments to the country next week. The U.S. bio firm earlier said the shipments initially set to arrive here late this month had been delayed to August due to production issues.

A total of 17.9 million people, or 34.9 percent of the country’s population, have received their first shots of COVID-19 vaccines, and 6.97 million people have been fully vaccinated, the KDCA said.

A total of 112,688 cases of adverse effects after vaccinations, with 1,809 coming in the past two days, have been reported since the country began vaccinations on Feb. 26, though 95 percent of them were found to be mild symptoms.

There have been 428 deaths after vaccinations, but health authorities have so far confirmed causality with vaccinations in only two cases.

Of the 1,823 domestic cases, infections from non-capital areas accounted for 611, or 33.5 percent, amid the fourth wave of the pandemic.

The southeastern port city of Busan and the surrounding South Gyeongsang Province reported 99 and 93 cases, respectively.

In the capital area, Seoul reported 568, while the surrounding Gyeonggi Province added 543. The western port city of Incheon confirmed 101.

Among virus clusters, the number of cases linked to a taekwondo academy rose by 12 to 221. An indoor sports facility in Daegu added seven more cases, raising its total to 136.

The number of cases tied to a bathhouse in Busan went up six to 89.

Imported cases came to 73, down 16 from the previous day. The total number of imported cases is now at 11,733.

Of the new imported cases, 21 came from Uzbekistan followed by Indonesia with 19.

The total number of people released from quarantine after making full recoveries was 170,494, up 1,865 from a day earlier.

The number of patients in critical condition came to 286, up 17 from the previous day.