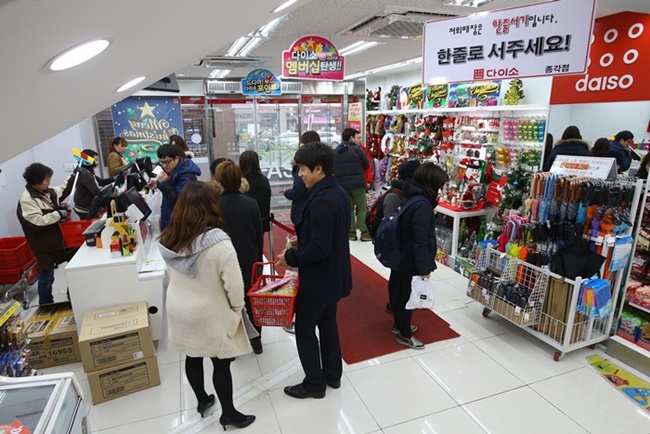 Under the new slogan ‘the people’s shop’, Daiso has launched a new brand campaign as part of efforts to put to rest questions over its nationality. (Image: Yonhap)

SEOUL, Feb. 28 (Korea Bizwire) — Discount store Daiso is pushing efforts to promote the fact that it is a Korean company amid speculation over its ties to the Japanese dollar shop brand of the same name.

Under the new slogan ‘the people’s shop’, Daiso has launched a new brand campaign as part of efforts to put to rest questions over its nationality.

“Though the parent company Hanil Manpower, which used to exclusively supply goods to Daiso in Japan, received equity investment worth 34 percent, the remainder of the company’s shares are owned by South Koreans including chairman Park Jung-boo,” a Daiso official said on Monday.

“While we use the same brand, we don’t pay royalties. Our brand identities are different, and since the early stages of our business, trademark rights have been applied for and registered under the name of Asung Daiso,” the official added.

To attract investment from Daiso and gain awareness, the company that began as ‘Asung’ changed its name to Asung Daiso, earning the right to operate under the name Daiso in South Korea.

Daiso began as a small shop dedicated to the sale of household necessities in Seoul soon before the Asian financial crisis hit in 1997, before becoming a South Korean retail giant that now sells over 30,000 types of items at affordable prices.

“To be technical, it’s a foreign-invested enterprise, according to the Foreign Investment Promotion Act. It’s different from foreign companies where decisions are made from headquarters located elsewhere,” the official said.

Daiso has faced questions over its nationality for some time, due to its Japanese-sounding name and similarities to the Japanese brand.

Marking its 20th anniversary this year, the brand has become one of the most successful retailers in the country on the back of affordable prices and a wide range of items on offer, helping boost both domestic investment, job creation, and small and medium-sized businesses.

Thanks to efforts to produce international hit products at home, South Korean products accounted for 70 percent of all items sold in 2015, creating job opportunities for over 600 companies.