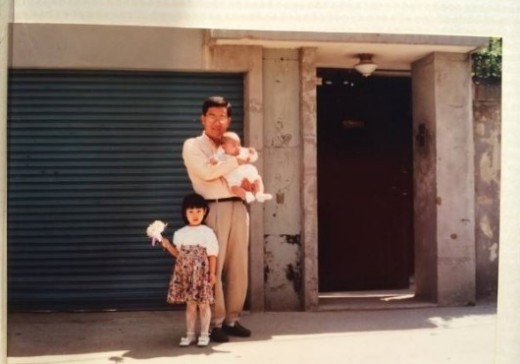 With rising doubts over her identity, Candy Koh, daughter of the leading candidate for the Seoul Education Superintendent race, posted another picture which shows her childhood image standing by Koh. (image: Candy Koh’s Facebook)

SEOUL, June 1 (Korea Bizwire) – It was completely out of blue. With South Korea’s local elections — scheduled to be held on June 4th — reaching their final stages, there has been an unexpected turn of events, in particular for the race of Seoul’s Education Superintendent.

Candy Koh, who says she is the daughter of Koh Seung-duk, leading candidate for Seoul’s education policy head, has created a stir across the country, by calling for ousting none other than her own father — high-profile national figure well known for his having passed state-run exams for law, diplomatic and administrative services  in a row in his 20s. In Korea, passing a bar exam alone is regarded as a very difficult task – especially hard in the past, so he has become a byword for “God of Study,” favorable image for a candidate for Seoul’s top education post.

Koh, however, has fallen into an ambush: Candy Koh, or Koh Hee-kyung in Korean name, who resides in New York, posted a message on her Facebook page, titled ‘To the Citizens of Seoul,’ which has proved an obvious attempt to persuade Seoul’s electorate to vote against his father.

Here are some extracts of her “rejection campaign” message:

When his candidacy came to my attention recently, I could not, in good conscience, stay silent as his child, Seoul’s citizens deserve now the truth about the person they may be choosing to represent and be in charge of Seoul’s education system: Seung Duk Koh never partook in the education of his own children.

You might shrug off of her accusation just as a complaint made by an affection-hungry child — largely driven by her needs to be taken notice. But she is 27 years old. More than that, her aunt, her mother’s elder sister, placed a supportive message to Candy Koh’s posting. The aforementioned aunt is the first daughter of Park Tae-joon, a prominent national figure behind the success of POSCO, South Korea’s largest steel maker.

South Korea is renowned for its intensely competitive education system and even envied around the world by the people’s extraordinary passion for learning and education. In this vein, the title of Superintendent of the Seoul Metropolitan Office of Education has many implications — even might be seen as a steppingstone to becoming Seoul’s mayor if things go on well.

Little wonder, the “manifesto” by Koh’s daughter out of blue seems to play a significant role in this election — Koh has been reportedly well ahead of two conservative-leaning contenders ― Moon Yong-lin and Rhee Sang-myon ― as well as liberal-minded opponent Cho Hee-yeon in the race for the “president” of Seoul’s education policies. 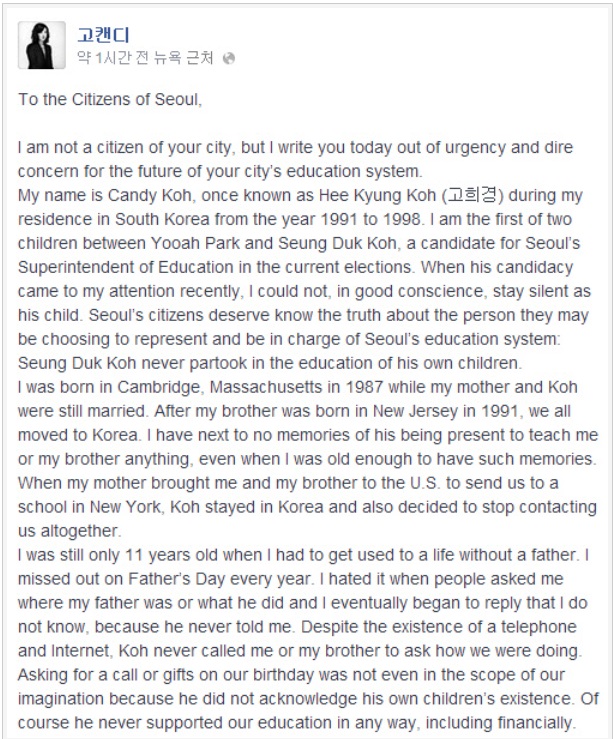 According to a poll by Gallup Korea last week, Koh turned out to lead the race with a 25.6 percent approval rating; first runner-up was Moon with 16.4 percent and Lee was in the third scoring 9 percent support. The liberal candidate Cho had lagged far behind in this race — largely because of his poor recognition among the electorate.

But funny things sometimes happen simultaneously. A young man who claimed as the second son of the candidate Cho, has also posted an attention-grabbing message on his social networking site, pleading in the sincerest way that his father, Cho Hee-yeon, is worth being recognized for — not by flamboyant career paths characterized by other contenders — but by his rare journey of life, continuously royal to his belief, friendship, love and faith.

It is reported that Cho donated all the compendation money after he was found innocent regarding his involvement in the student movement in the 1980s, even though his family had not enough to live on then. And according to local reports, the son’s supportive message might have a positive effect for his father — at least in terms of raising the public profile of his father as a candidate among the voters.

The final results of the election are yet to be seen. But immediate family members’ “involvement” in the campaign using their social media might prove once again that SNS tools are increasingly important for not just the expression of individual identity, but shedding light on others’ identities and hidden truths — even wreaking havoc on their close friends, associates and family members with a single blow.