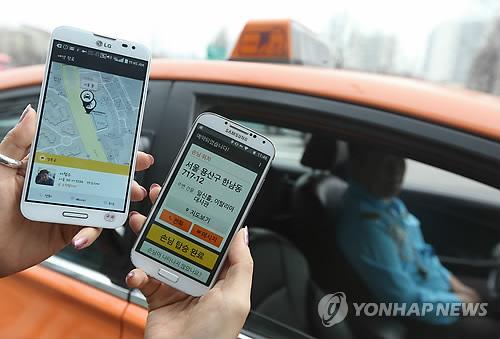 Users demonstrate the KakaoTaxi application in this file photo taken on March 31, 2015. Daum Kakao Corp. on July 6 said it plans to launch a charge-based luxury taxi-hailing service later this year, riding the popularity of its existing free app. (image: Yonhap)

KakaoTaxi has gathered a combined 5 million calls from users in just three months after its release, with the number of member cab drivers exceeding 110,000, according to Daum Kakao.

Launched in late March, KakaoTaxi is a cab-hiring app that only requires users to type in destinations, which will be sent to an available cab driver. The app doesn’t require the rider to tell the driver the current location, since the app will automatically show it on the driver’s app through the Global Positioning System.

“While some people expect Daum Kako will charge commission to the users of KakaoTaxi in the future, this will not happen,” an official from Daum Kakao said. “Instead, we plan to launch another service later this year, targeting users seeking high-end taxi services.”

Daum Kakao’s latest plan comes in line with the Ministry of Land, Infrastructure and Transport‘s bid to ease regulations on the operation of high-end taxis, which currently requires the use of automobiles with an engine capacity of 3,000 cc or larger.

Due to the strict regulation, there have been no official providers of the taxi service in South Korea.

The government’s plan to lower the ceiling to around 2,800 cubic centimeters is expected to pave the way for taxi operators to jump into the business and allow KakaoTaxi to expand its service.

High-end taxis are given more leeway compared with existing luxury taxis, as they do not require meters nor taxi signs, and are allowed to freely set prices.