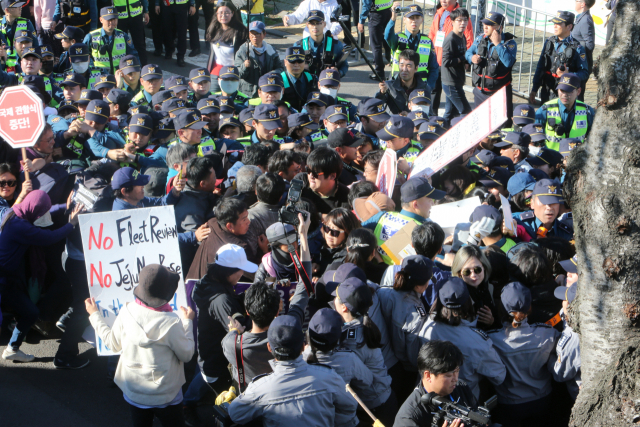 Activists hold a protest against an international fleet review in front of a naval base on Jeju Island, South Korea, on Oct. 11, 2018. (Yonhap)

On March 7, four activists who have long opposed the construction of the naval base cut the barbed-wire fences surrounding the installation, and two of them entered the base and wandered around for about two hours before being caught by the military police.

“Several CCTVs had problems in detecting movements and raising the alarm, so that two Navy soldiers in charge of monitoring the system at that time failed to find the intruders immediately,” an officer of the Joint Chiefs of Staff (JCS) told reporters, explaining the results of its four-day probe.

The military replaced several cameras with new ones last year after they broke down due to typhoons, but the new ones did not interface with the existing system, he added.

Upon finding the damage to the fence, a service member reported the case to his superior, who did not follow the due procedure of calling a flying squad instantly, according to the JCS.

“We will sternly reprimand those responsible and come up with measures to improve and further beef up the overall surveillance system of the base,” the JCS said, apologizing for causing concern.

The activists have been subject to a police probe for inflicting damage to the military facilities and infiltrating the base. They did not do anything while inside the installation, according to a Navy officer.

In 2007, the government selected the small fishing town of Gangjeong on Jeju as the site for a naval base.

The decision sparked fierce protests from residents and activists, who have claimed that it could set off a regional arms race and damage the environment of the island.

The protests continue, though construction was completed in 2016.