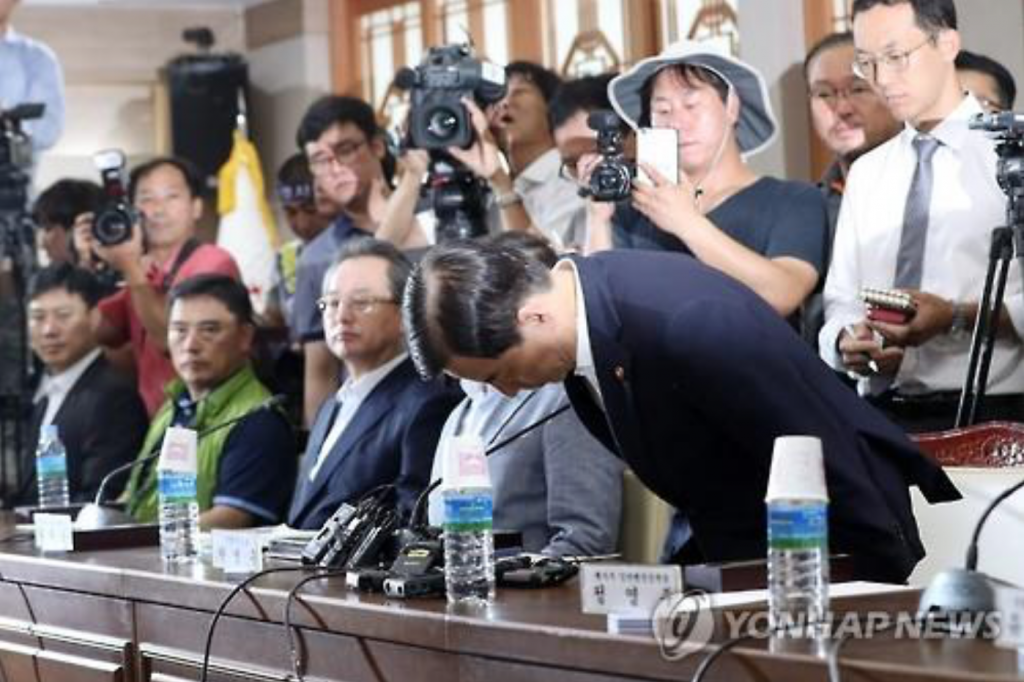 Defense Minister Han Min-koo takes a deep bow to representatives of Seongju residents before he starts a meeting with them in Seongju County building, about 300 kilometers southeast of Seoul. (image: Yonhap)

SEOUL, Aug. 17 (Korea Bizwire) – South Korea’s defense chief on Wednesday defended the government’s decision to select Seongju, a southeastern county, as the site for an advanced anti-missile system to counter threats from North Korea, according to military officials.

In a meeting with representatives of Seongju residents held in the rural town from 2:00 p.m., Defense Minister Han Min-koo apologized for the selection process that did not provide an explanation in advance to residents about the deployment of the Terminal High Altitude Area Defense (THAAD).

In his opening speech, the policymaker said the decision to deploy the THAAD missile defense system in Seongju, 296 kilometers southeast of Seoul, by the end of 2017 was inevitable as the county’s location was optimal to defend against ever-increasing nuclear and missile threats from the North.

“The decision to install a THAAD battery here is purely a self-defensive measure taken to protect South Koreans from ever-growing nuclear and missile threats from North Korea,” Han said.

In response to his remarks, Lee Jae-bok, who represents 50,000 Seongju residents, asked the minister to give a full explanation regarding the site selection process.

On July 8, the South and the United States announced a decision to deploy the THAAD missile defense system in South Korea.

To allay anger and fear of Seongju people following the decision, Han and Prime Minister Hwang Kyo-ahn visited Seongju early in July but failed to engage in dialogue with local people and found themselves trapped on a bus for over six hours as local protesters kept them from leaving the area.

Opponents have argued the THAAD system’s powerful “X-band” radar could pose serious health problems to nearby residents. They didn’t accept the test results that showed the system’s radar waves didn’t have any serious health impact.

They have also taken issue with the government’s “unilateral” decision to install the THAAD battery in Seongju.