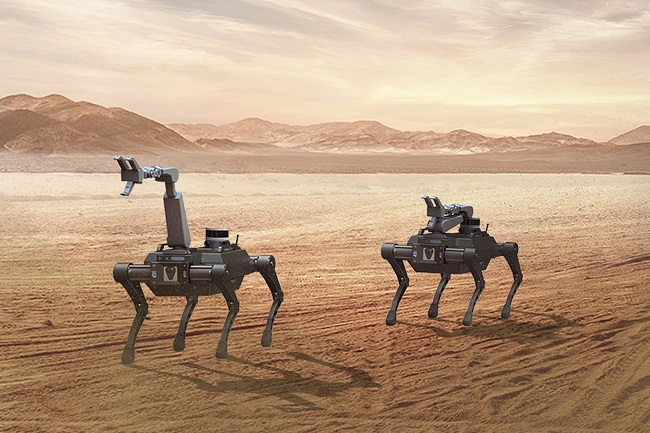 This image, provided by Hyundai Rotem Co., shows a rendering of a multi-legged counterterrorism robot that the company will develop under an agreement with the Defense Acquisition Program Administration, signed on Aug. 10, 2022.

Hyundai Rotem Co., a train and defense company, has launched a drive to develop a multi-legged counter-terrorism robot that is expected to be commercialized by 2024.

With four legs, the robot can move in any direction and can be modified to include robot arms, a remote armament system, and tear gas sprayers depending on the mission.

Hyundai Rotem is also engaged in the development of a multi-purpose unmanned vehicle. Since it operates autonomously and uses batteries, it generates less noise and is suitable for military operations.

Hanwha Defense Co. is on track to develop a variety of military robots, including unmanned search vehicles, reconnaissance robots, and bomb-detecting robots.

The company’s multi-purpose unmanned vehicle for infantry use can perform search and reconnaissance missions at the same time on a remote basis and has a partial self-driving capability.

Lig Nex1 Co. is pushing to develop a wearable robot. This robot enables a soldier in full gear (About 40 kilograms) to run at a speed of 10 kilometers per hour, about twice as fast as the regular march of infantry soldiers.

The size of the world’s military robot market is forecast to grow from US$17.5 billion in 2020 to $34.6 billion in 2030, posting an annual growth rate of about 7.4 percent, according to a report from Allied Market Research.