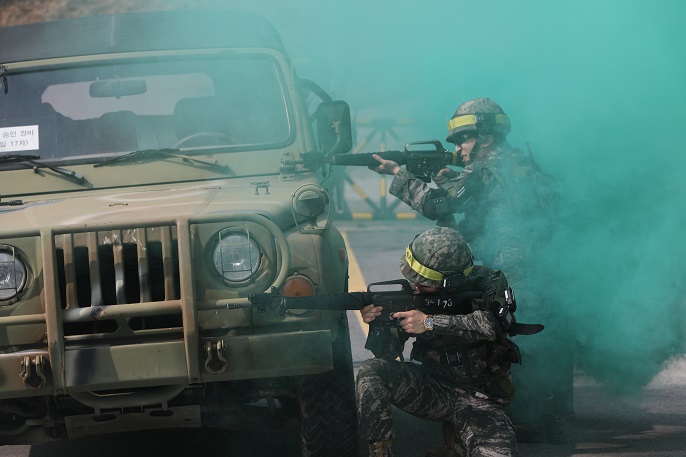 The file photo taken March 4, 2019, shows reservists engage in a mock combat drill at a military training camp in the city of Namyangju, Gyeonggi Province. (Yonhap)

SEOUL, Aug. 21 (Korea Bizwire) – South Korea called off annual field training for reserve forces for the first time in 52 years Friday as the country has been struggling with a recent sharp surge in coronavirus cases.

The training sessions for the country’s 2.75 million-strong forces were supposed to kick off in September in a scaled-back manner after a monthslong delay over the COVID-19 situation.

But the ministry decided not to conduct field programs and instead have the forces take online programs “to join the nationwide efforts to overcome the coronavirus crisis,” according to the officials.

It is the first time that the military has adjusted the training for reservists since its implementation in 1968.

Instead, the ministry will launch online programs in November, and volunteers for the distance learning will be allowed to skip their due indoor courses for next year, according to the ministry.

South Korean men are required to go through one training session of one to three days in duration per year as reservists for six years after completing their mandatory military service.

The move came as South Korea has seen a spike in new COVID-19 cases over the past week. On Friday, the country reported 324 more COVID-19 cases, which is a five-month high, according to the Korea Centers for Disease Control and Prevention (KCDC). 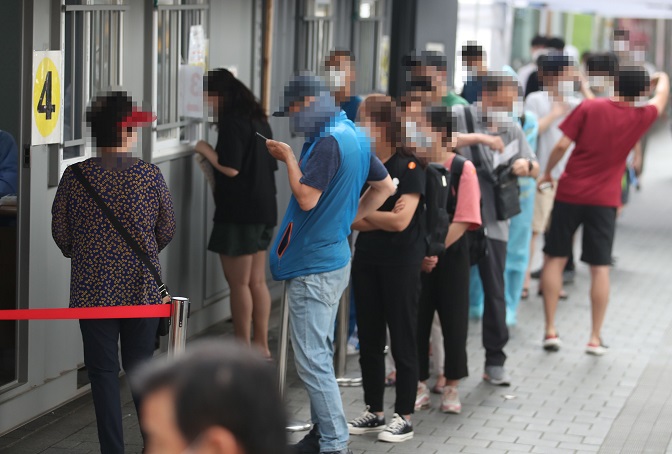 Citizens wait in a long line to undergo COVID-19 tests at a makeshift outdoor clinic in Seoul’s Seongbuk Ward on Aug. 21, 2020. Virus cases have spiked in South Korea since last week, many of which are linked to a church in the Seongbuk neighborhood. (Yonhap)

An Army soldier showed symptoms while under quarantine at his base in Yangyang, 215 kilometers east of Seoul, upon returning from vacation earlier this week, according to the ministry.

Some 80 members of the base are now undergoing virus tests, it added.

Another patient is the civilian worker affiliated with the Joint Forces Military University in Daejeon, who also returned to work from vacation last week and then developed symptoms. Around 20 of his colleagues await their test results, according to the ministry.

Authorities have been conducting contact tracing and looking into their exact route of infections, it added.

Currently, 928 service members are in isolation in accordance with the health authorities’ guidelines, and the military has quarantined an additional 3,250 people under stricter anti-virus schemes of its own as a preventive step.

Since Wednesday, the defense ministry has restricted all service members from vacationing and off-installation trips.