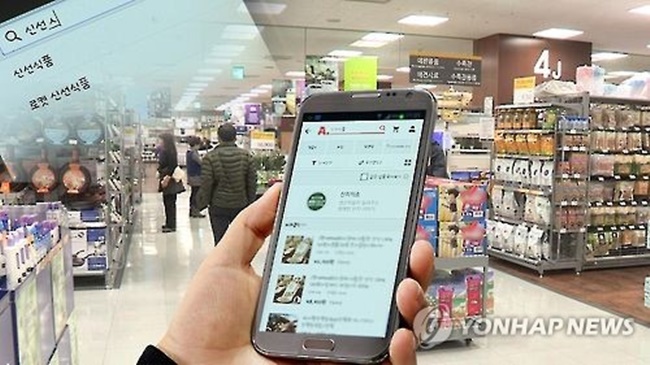 The amount of transactions made for fresh produce through onlineshopping malls reached 2.18 trillion won (US$1.92 billion), up 35.6 percent from the first three months of 2016, according to the data by Statistics Korea. (Image: Yonhap)

SEOUL, May 8 (Korea Bizwire) – Grocery shopping via online and mobile channels in South Korea rose sharply in the first quarter from a year earlier, backed by robust demand for delivery services of fresh food amid a rise in the number of one-person households, data showed Friday.

The amount of transactions made for fresh produce through online shopping malls reached 2.18 trillion won (US$1.92 billion), up 35.6 percent from the first three months of 2016, according to the data by Statistics Korea.

Of the total, purchases made via mobile devices soared 56.7 percent on-year to 1.55 trillion won over the cited quarter, the latest data showed.

In March alone, grocery shopping accounted for 11.7 percent of all online purchases tallied, trailing behind travel and booking by just 3 percentage points. In terms of mobile purchases, food shopping took up the biggest portion at 14.5 percent.

“The diversification of fresh food supplies and shortened delivery periods due to heated market competition has led to the overall increase of the transactions and improvement of online shopping services for consumers,” Sohn Eun-lak, an official at Statistics Korea said on Thursday.

The growing number of single-person households is another factor that has fueled the demand for online grocery shopping, observers added.

Along with many double-income families that have little time to shop at a supermarket, those who live and eat alone have shown a tendency to spend generously if they can have groceries delivered with a simple click.

One-person households in Korea account for some 35 percent of the total population as of September 2016.

Baemin Fresh is another player, run by mobile delivery app provider Woowa Brothers, which has been actively expanding its foothold in the mobile grocery shopping business. In a recent media release, it said the number of Baemin Fresh users has surpassed 240,000 since it launched its mobile app last February.

Other e-commerce sites, including Ticket Monster and WeMakePrice, have also joined the bandwagon with their own delivery services of fresh food supplied by its partners based in provincial regions.

Industry watchers said the popularity of online grocery shopping will likely continue for some time, given strong consumer demand and the country’s fast-growing mobile sector.

South Korea’s online shopping transaction reached 18.2 trillion won in the first quarter, up 19.4 percent from a year ago, with the mobile shopping accounting for 58.6 percent of the total payments, according to government statistics.