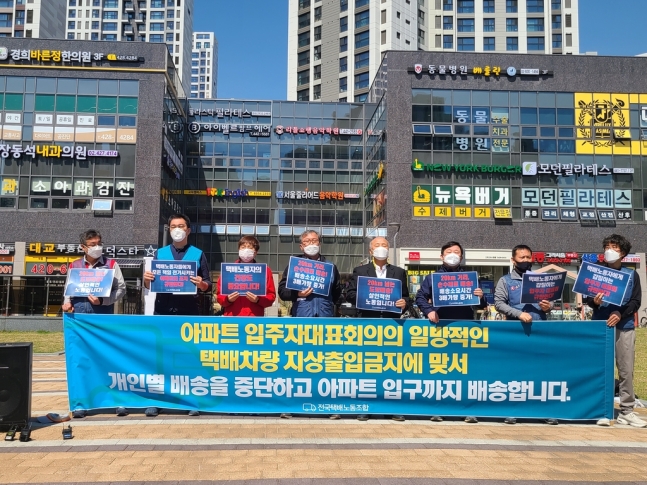 A delivery workers union, associated with the Korean Confederation of Trade Unions, holds a press conference in front of an apartment complex in eastern Seoul in protest of a rule that permits delivery trucks to use only underground parking spaces. (Yonhap)

SEOUL, April 8 (Korea Bizwire) – Delivery workers threatened Thursday to end doorstep delivery for customers living at a massive apartment complex in eastern Seoul, in protest against a rule that requires delivery trucks to use only underground parking spaces.

In a press conference held in front of the complex that houses 5,000 apartment units, the workers’ union, associated with the Korean Confederation of Trade Unions, the country’s second-largest labor group, denounced the measure, calling it “unilateral” and inconsiderate to the workers’ welfare.

Starting April 1, the complex enforced the ban out of safety concerns for residents who often complain about service trucks running too fast on residential streets for fast delivery, and told delivery workers to park their cars on basement floors to bring parcels to customers.

The core issue, however, is that most of the delivery trucks are unable to enter the underground parking garage due to the maximum height clearance, and delivery workers were left with no option but to use carts to carry loads of packages from the complex’s entrance to customers’ doors.

“The residents association argues that they have given us a one-year grace period, but the fact is that we were just unilaterally notified of the decision,” it said.

It also dismissed a suggestion that workers buy new trucks or modify vehicles to clear the height limit.

The workers argued that it took them three times longer than usual to do their job and that they faced bigger health risks, such as back and knee pain. They also said parcels are more likely to get lost. 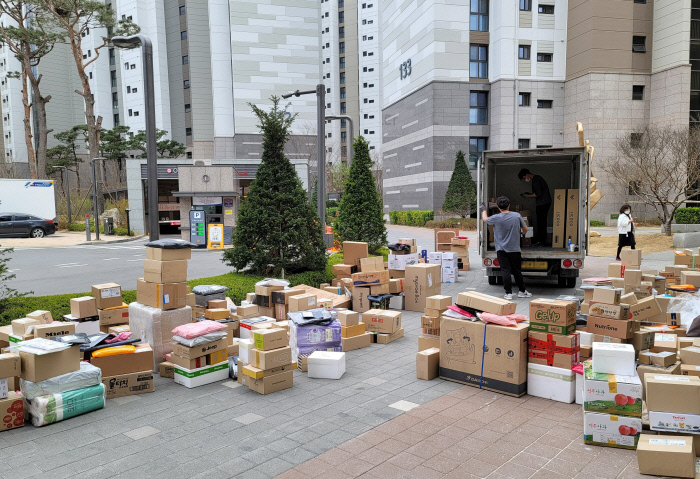 Packages are left near the entrance of an apartment complex in eastern Seoul on April 2, 2021. (Yonhap)

Since the rule was imposed, workers have left parcels near the entrance, causing chaos as residents have to sort through hundreds of packages to find theirs.

“What residents suggest are not practical alternatives,” it said. “The complex should allow the trucks to run on the ground and come up with additional safety measures.”

This is not the first episode of its kind in a country where volumes of parcels have significantly risen since the coronavirus pandemic and apartments, the most common housing form, have enforced stricter safety measures.

“Packages will continue to be delivered only to the complex’s entrance unless the measure is withdrawn,” the union warned.

Residents have been discussing ways to solve the issue on an online community forum with around 3,500 members.

Ideas for viable solutions include making a delivery route inside the complex, letting workers use electric carts to carry packages or hiring elderly residents for door-to-door delivery service.

“Each side should give in a little and try not to protract this conflict,” one resident wrote.