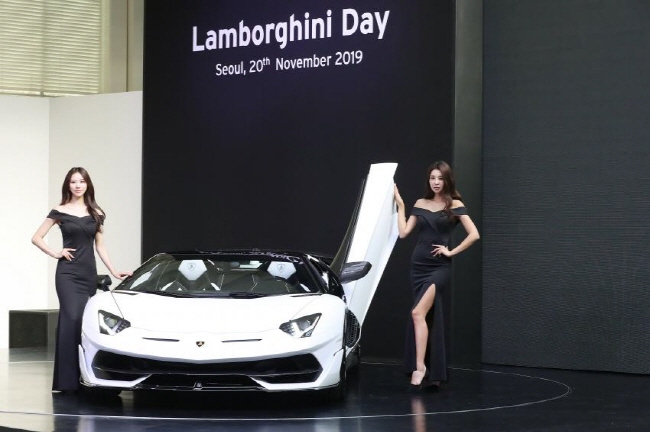 Models show off a Lamborghini Aventador Svj roadster at the 2019 Lamborghini Day Seoul on Nov. 20, 2019. Only 800 units of the limited edition automobile were produced. (Yonhap)

SEOUL, Dec. 15 (Korea Bizwire) — The demand for luxury cars in South Korea increased sharply in 2019 from a year earlier, data showed Sunday, despite the overall decrease in the sales of imported cars here.

Sales of imported luxury cars with price tags of 300 million won (US$255,972) or higher reached 360 units over the January-November period, posting a threefold growth on-year, according to the data compiled by the Korea Automobile Importers & Distributors Association.

The number of cars with a 200 million-won level price tag shot up 25 percent to reach 3,560 units as well, the data added.

The South Korean market for imported cars, however, has been facing a tumble amid the economic slowdown, coupled with a boycott of Japanese brands by local consumers amid the trade row between Seoul and Tokyo.

The number of imported cars sold here over the period came to 214,708 units, down 10 percent on-year.

One thought on “Demand for Luxury Cars Increasing in S. Korea”