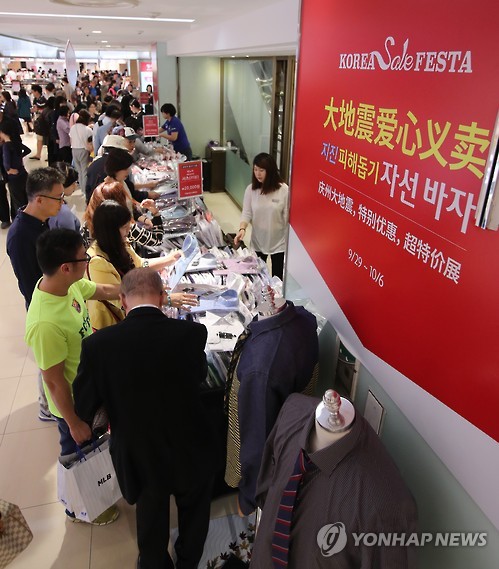 The “Korea Sale Festa” is the government-led sales event held from Sept. 29 to Oct. 9. It involved major retailers, manufacturers and traditional markets, to jack up the stagnant domestic consumption and attract more tourists during the major Chinese holiday season.

Last year, a similar event was held form Oct. 1-10 under the name of “Korea Black Friday,” benchmarking one of the biggest sales days in the United States.

While last year’s event fell below market expectations due to lack of participants, the number of participants for the Korea Sale Festa more than tripled to 250, and offered a wider range of options and discount rates.’

The biggest beneficiaries of the event were major department stores.

Revenue of home appliances jumped 41.8 percent over the period, while furniture and foreign fashion brands surged 38.3 percent and 19.6 percent, respectively.

Sales at Shinsegae Department Store surged 9.7 percent over the period, the company said, with furniture and home appliances showing the biggest sales jump.