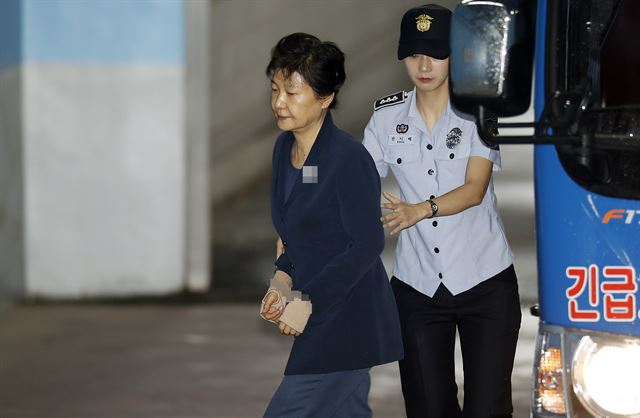 SEOUL, Oct. 18 (Korea Bizwire) – South Korea on Wednesday denied a reported allegation by a group of lawyers that former President Park Geun-hye’s human rights are being violated in her detention cell.

CNN reported Park’s international legal team led by MH Group plans to submit a document on her human rights situation to the United Nations Human Rights Council. They claimed that Park, who’s standing trial for corruption and abuse of power, “is living in a cell that’s dirty, cold and constantly lit so she cannot sleep,” according to the report.

The team’s draft report said the 65-year-old ousted leader suffers from a handful of chronic conditions and maladies.

“Her condition is only getting worse, and there is no evidence that she is receiving adequate care,” the draft said.

The Ministry of Justice said the allegations are groundless.

“(Park) is being held in a room of an optimum size equipped with a television, locker, toilet and a heated floor,” it said in a statement released to media.

The Seoul Detention Center told Yonhap News Agency that Park has been provided a folding bed since she was first admitted, denying CNN’s report. It added the heating system installed in the floor was activated last week given the seasonal change.

The authorities said they provide every opportunity for Park to get medical treatment for her maladies that include back and joint pains, as well as time for a regular workout.

“She gets treatment from our internal medical staff whenever necessary, not to mention that she’s been allowed out twice for hospital visits,” the ministry said.

The authorities also argued against the claim that light in the cell is disrupting her sleep.

“We have the night lamps turned on for the night patrol,” the spokesperson said. “We cannot leave (the cells) in the dark.”

The center stressed that any unfair treatment of the former president is unlikely given the high level of public attention and constant monitoring by Park’s advocates.

Park’s legal counsel in Korea said they had no knowledge of such allegations being raised by a foreign legal firm and its plan. One of her lawyers said he’s never heard of MH Group.

“But I believe any action is possible from any group around the world since she has many supporters overseas,” the lawyer said.

The disgraced leader was arrested and indicted in March on charges of bribery and abuse of power. Following a court’s extension of her detention last week, Park spoke out Monday for the first time since her trial began in May, accusing the judiciary of making her a victim of political revenge. She said she would give up her rights to counsel.