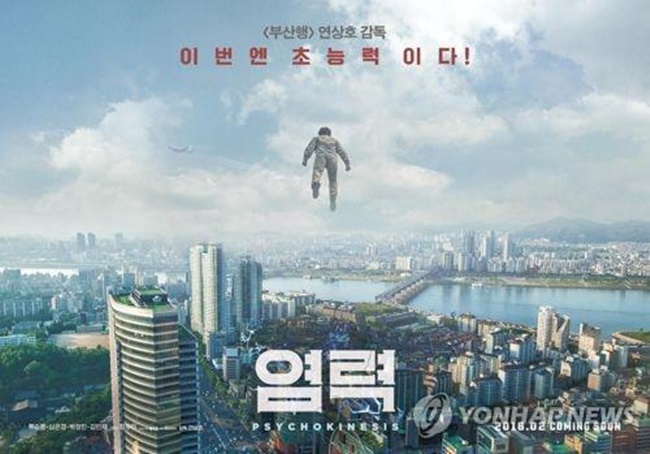 In a press conference to unveil his new movie “Psychokinesis” Tuesday Yeon said he wanted to do something new and put his childhood imagination onto the big screen. (Image: NEW)

In a press conference to unveil his new movie “Psychokinesis” Tuesday Yeon said he wanted to do something new and put his childhood imagination onto the big screen.

“After ‘Train to Busan,’ I’ve been asked whether I want to make another zombie film. But I wanted to try something new,” Yeon told reporters at CGV Apgujeong theater in southern Seoul. “So I made a movie about supernatural powers, which I wanted to do for a long time,”

“Psychokinesis” stars Ryoo Seung-ryong as Seok-hyun, an ordinary man who discovers his psychokinetic ability to move objects with his mind. He uses his newly discovered strength to save his daughter, played by Shim Eun-kyung, from trouble.

“For a long time, I’ve loved comics that deal with supernatural powers and have pondered on whether I can make a comic action movie of them,” said Yeon.

The director said he has crafted a story of what can happen when an ordinary person suddenly gets psychokinetic powers. Yeon said he wrote the script specifically with the two lead actors, who worked together in his previous film “Seoul Station,” in mind.

Ryoo said he gained 12 kilograms to play the role of an average middle-aged man. “I was inspired a lot by director Yeon’s demonstrations at the set on how to act out his supernatural powers,” said Ryoo.

“Psychokinesis” is set to be released in late January.