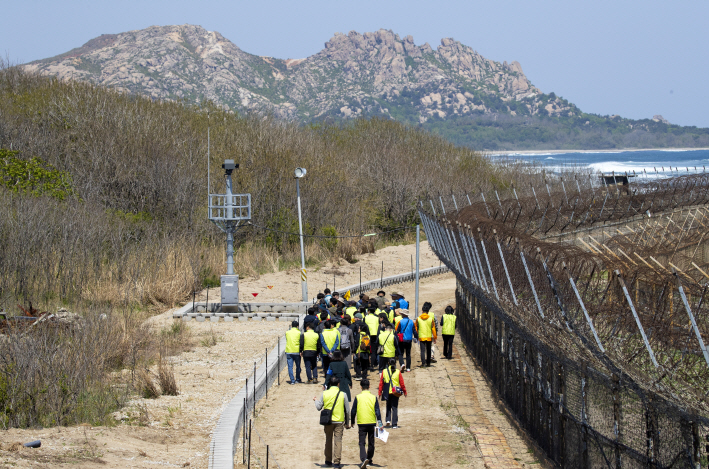 SEOUL, Sept. 30 (Korea Bizwire) — The image of the Demilitarized Zone separating South and North Korea is associated more with war this year than last year, a local research institute said, as the inter-Korean peace process has stalled.

The Gyeonggi Research Institute, a think tank run by the government of Gyeonggi Province, said that a survey of 550 South Koreans, 150 Germans, 150 Chinese and 150 Irish people showed that “war” was the No. 1 image with 6.7 percent among more than 20 keywords associated with the DMZ.

The figure was up from 4.4. percent last year.

The results appear to reflect the changes in the geopolitical landscape surrounding the DMZ, the think tank said, referring to the stalled inter-Korean peace process amid a deadlock in nuclear talks between Pyongyang and Washington.

Other images associated with the DMZ include “landmines” with 4.9 percent and “inter-Korean division” with 4.8 percent.

But the percentage of people who picked “peace” as the No. 1 image associated with the DMZ fell to 3.5 percent from 5 percent last year.

The survey also showed that 43 percent of the foreign respondents first learned about the DMZ that separates the two Koreas from 2015 to 2019.

The survey attributed the increase in awareness among foreigners to major political events such as the historic meeting between South Korean President Moon Jae-in, U.S. President Donald Trump and North Korean leader Kim Jong-un, held at the truce village of Panmunjom last year.

It added that cultural events at the border towns in recent years, including a concert for peace and an international cycling tournament, also had an “exposure effect” on foreigners.