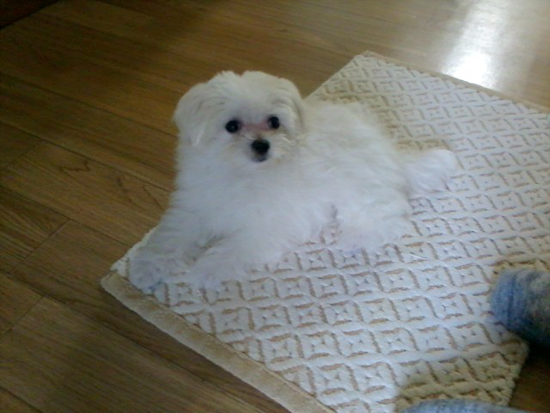 They escaped unscathed thanks to their barking dog ‘Doongee’ shown on the image above – the same old but always heartwarming story. (image:Yonhap)

SEOUL, Feb. 11 (Korea Bizwire) — This is the same old story, but no matter how many times you hear it, it’s always heartwarming, especially if you are an animal person.

A family of two – a 77-year-old elderly woman whose surname is Kim, and her son, aged 61 — were sleeping when a fire broke out outside their room at an apartment complex in Busan, South Korea at 40 minutes past midnight on February 10.

The old woman awoke suddenly to hear their dog Doong-ee barking desperately, and she sensed thick smoke seeping into the room. She rushed to wake up her son, and they escaped their house barefoot, together with the savior Doong-ee, a Maltese breed, two years old, that they adopted one year ago.

Some twenty minutes after they hurriedly escaped their home, it was consumed in flames. They escaped unscathed thanks to their barking dog – the same old but always heartwarming story.

The Maltese breed is among the most popular breed for Koreans to adopt. With most people living in apartment complexes due to the dense population, small-sized dogs such as Maltese, Shih Tzus, Poodles, Chihuahuas and Yorkshire Terriers are favored and they dominate the nation’s top pet breeds, accounting for over 80 percent out of the total, according to the market research institute Euro Monitor.