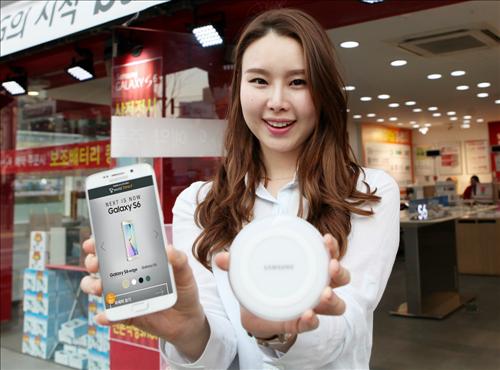 A model holds up the Galaxy S6 on March 30, 2015, which will be available for preorders by South Korean mobile carriers starting April 1. The official sales will start on April 10. (image: SK Telecom)

SEOUL, March 30 (Yonhap) – South Korea’s mobile carriers said Monday they will accept preorders for Samsung Electronics‘ latest high-end smartphone models — the Galaxy S6 and Galaxy S6 Edge – this week, adding that the models will be available for use on April 10.

KT and LG Uplus also said they will start a special promotion for preorders starting Wednesday. The carriers, however, have not yet revealed price details.

The new Galaxy S6 series, unveiled ahead of the Mobile World Congress in Spain early this month, boasts the industry’s first wireless-charging batteries and Samsung’s mobile payment system set for a local debut in the second half of this year.