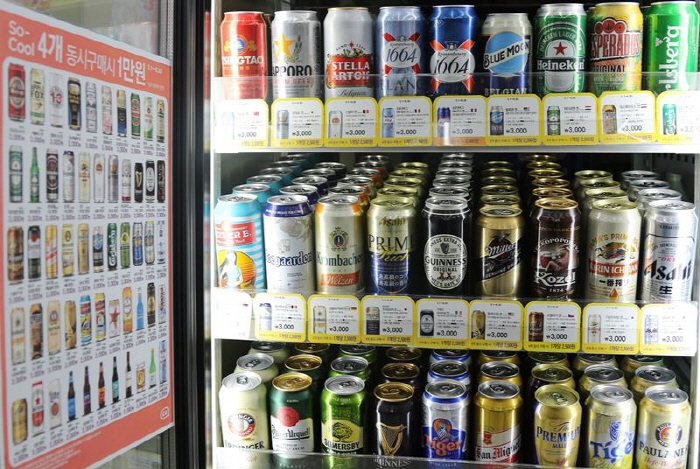 The status of Japanese beer, which has traditionally been strong, has faltered, while Chinese beer has rapidly risen in popularity. (image: CU)

CU, a convenience store chain operated by BGF Retail Co., analyzed the changes in the percentage of beer sales by country of origin over the past five years, and found that the status of Japanese beer, which has traditionally been strong, has faltered, while Chinese beer has rapidly risen in popularity.

In 2014, sales of Japanese beer, led by Asahi, accounted for 38.1 percent of total beer imports, but that portion fell by more than 10 percent to 27.5 percent in the January to May period this year.

On the other hand, Chinese beer led by Tsingtao had only 4.9 percent of sales until 2014, but this year, it more than doubled to 10.2 percent, jumping to the third place in sales.

In addition, French beer, which was outside the top 10 rank in 2014, saw its sales ranking jump to fifth place this year.

American beer, which was popular as the first generation of imported beer such as Budweiser and Miller, accounted for 10.2 percent of sales in 2014, but this year’s sales fell to 6.8 percent.

“As setting a price of 10,000 won (US$8.60)-for-four-cans of imported beer has become a common promotion at convenience stores, the number of related products has also nearly doubled compared to five years ago, and there has also been a significant change in beer preference by country,” a BGF Retail official said.