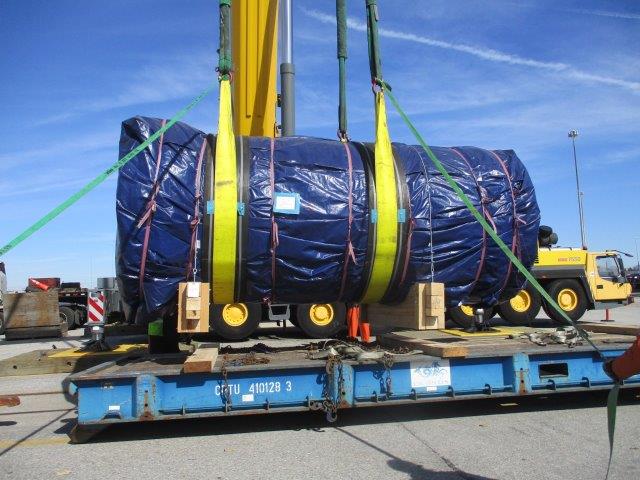 This photo provided by Doosan Heavy Industries & Construction Co. shows a wrapped cask being transported in the U.S.

Under the deal with the Nuclear Assurance Corp. (NAC), a U.S. provider of nuclear fuel cycle technology and consulting solutions, Doosan Heavy delivered the casks, the company said.

But Doosan Heavy did not reveal the value of the deal, citing a confidentiality agreement with NAC.

Doosan Heavy is slated to provide two transportable storage canisters, a key component of the dry storage casks in June, under a separate deal with the U.S. company.

The export of the dry storage casks is meaningful as Doosan Heavy paved the way to tap into the overseas spent nuclear fuel cask market for the first time, the company said.

Since 2015, Doosan Heavy has developed casks for spent nuclear fuel under the technology support of NAC.

The company has been seeking the approval of the designs for its casks from the U.S. Nuclear Regulatory Commission (NRC), an independent agency regulating commercial nuclear power plants and other uses of nuclear materials.

Doosan Heavy predicts it could win the approval in June.