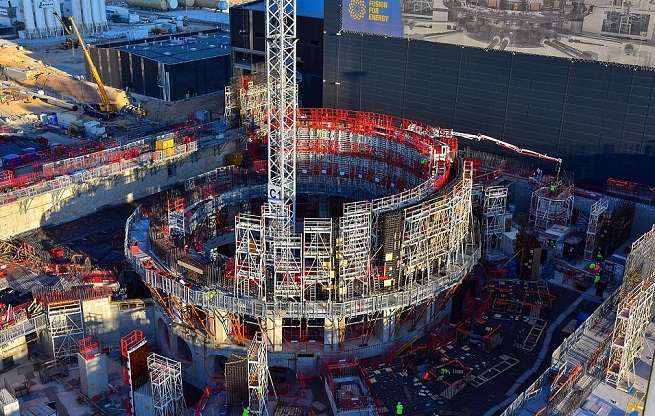 This photo provided by the International Thermonuclear Experimental Reactor (ITER) consortium shows the construction site of ITER in Cadarache, France.

Under the deal signed with the International Thermonuclear Experimental Reactor (ITER) consortium launched in late 2006, Doosan Heavy Industries along with its British subsidiary Doosan Babcock will provide pressurizers by 2022, the company said in an emailed statement.

The pressurizers will be used to retain pressure and protect from overpressure of the heat exchange system to be mounted on the reactor that started to be put together last month, the company said, without giving details on the amount of the deal.

South Korea joined in the ITER consortium in 2003, which also includes the European Union, the United States, Japan, Russia, China and India.

The ITER is an experiment to determine if a super-hot plasma field, and naturally abundant tritium and deuterium, can be used to create an artificial sun on Earth, or a limitless energy resource.

The reactor is being built in Cadarache in the southeastern part of France with the aim of completion by 2025, and it is slated to be operated by 2042.

Cash-strapped Doosan Heavy Industries is to issue new shares worth 1.3 trillion won (US$1.1 billion) and sell them first to its shareholders and then to the public as part of its efforts to repay its debts worth 3 trillion won extended by its creditors including the Korea Development Bank (KDB).

Doosan Heavy has been pushing ahead with its plan to reorganize its business line to gas turbines, renewable energy, midsized nuclear reactors, hydrogen and fuel cells.