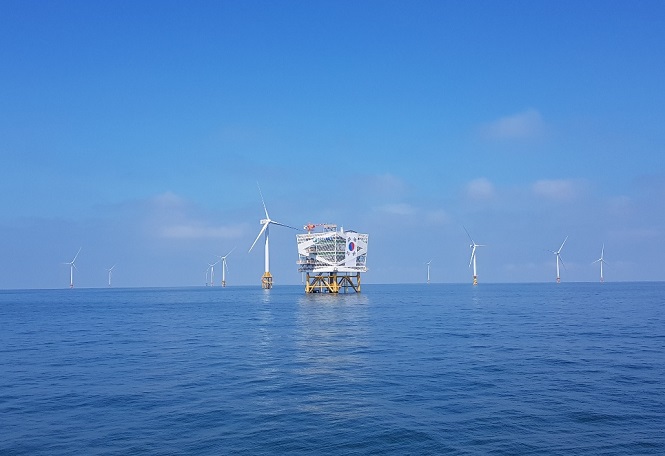 This file photo, provided by Korea Offshore Wind Power on Oct. 27, 2020, shows a test site of the offshore wind farm to be built in seas off the coast between Gochang County and Buan County, which is about 250 kilometers southwest of Seoul.

SEOUL, Dec. 17 (Korea Bizwire) — South Korea’s top power plant builder Doosan Heavy Industries & Construction Co. said Thursday that it has joined forces with a local government to build an offshore wind farm in seas off the coast of the southwestern part of the country.

Doosan Heavy signed a deal with the government of North Jeolla Province to cooperate on the construction of a 2.4-gigawatt offshore wind farm to be completed by 2028, a 14 trillion-won (US$12.8 billion) project, the company said in an emailed statement.

Under the deal, Doosan Heavy will provide and maintain wind power generators, as well as build the offshore wind farm in seas off the coast between Gochang County and Buan County, which is about 250 kilometers southwest of Seoul.

The local government will provide the power plant builder with administrative support.

Last July, the Ministry of Trade, Industry and Energy said South Korea will build a 12-gigawatt offshore power plant in its seas by 2030.