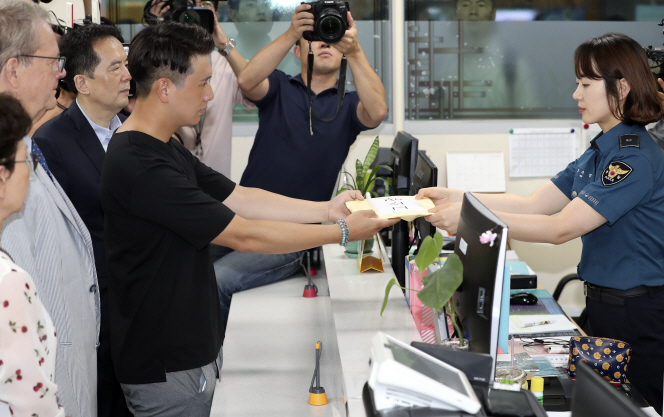 SEOUL, Aug. 9 (Korea Bizwire) — A group of 21 angry consumers filed a complaint against six top officials of BMW and its South Korean unit to press for a probe into a recent series of fires in vehicles amid growing worries over the German company.

They lodged the complaint at Namdaemun Police Station in central Seoul, said Ha Jong-sun, a lawyer who represents the plaintiffs.

The six in the complaint include Johann Ebenbichler, BMW’s vice president on quality management, and Kim Hyo-joon, chief of the South Korean unit.

The move came just hours after two more fires erupted in the engine compartments of BMW vehicles. The latest accidents raised to 36 the number of fires that broke out in vehicles made by the luxury carmaker in South Korea so far this year.

The majority of cars affected were the diesel-powered 520d sedans. No one has been hurt by the fires.

The plaintiffs urged law enforcement authorities to launch a probe into email correspondences between BMW and its South Korean unit to secure evidence for suspected attempts to cover up the defects.

They claim that BMW was aware of the problem associated with the exhaust gas recirculation (EGR) as early as 2016, but it tried to hide the fire hazard. The company only announced a recall plan in July.

Lee Gwang-deok, a 29-year-old salaried worker who is one of the plaintiffs, said his BMW 520d was totally consumed by fire after it was driven on July 19 but the carmaker didn’t provide any compensation, which meant that he incurred a “huge loss.”

“I bought the car new in November 2016 and used a vehicle repair and maintenance center in my neighborhood one time for a peeled paint job on the front side. BMW refused to compensate me as I didn’t use its after-sales services center for the minor repair work. More disappointingly, the company failed to explain what caused the fire,” Lee said.

On Friday, BMW Korea reported to the transport ministry that it had been collecting information on similar fire cases in Europe in the past two years and only recently found out that the EGR module was defective.

In an “urgent” press conference held in Seoul on Tuesday, Ebenbichler said the leakage of an EGR cooler as the main cause of the fires that happened to BMW cars in Korea this year.

“We cannot understand why BMW headquarters, which claims to have a high degree of technological prowess, failed to identify the cause of the fires for more than 2 1/2 years,” the plaintiffs said in a written statement.

The transport ministry has already vowed to look into BMW Korea over whether the local unit intentionally delayed issuing a recall of more than 100,000 passenger cars.

The official recall is scheduled to start Aug. 20 to replace the gas recirculation unit and clean the EGR pipe. The device is one of the principal devices used to reduce nitrogen oxide emissions from diesel engines.

Also Thursday, opposition lawmaker Hong Chul-ho said he plans to submit a revision to the law on vehicles that would allow the government to temporarily suspend the operation of vehicles with safety hazards.

Transport Minister Kim Hyun-mee said the government may consider issuing an order to suspend the operation of the model and year of BMW vehicles involved in the recent fires.

“What if Korean vehicles caught fire (due to a faulty part) in Germany? If BMW vehicles catch fire in places like tunnels, gas stations, or parking lots, it could lead to a serious incident,” the minister said.

If a driving suspension is issued by the central government, regional authorities will be given 14 days to prepare before they take steps to keep the cars off the streets, according to the government.