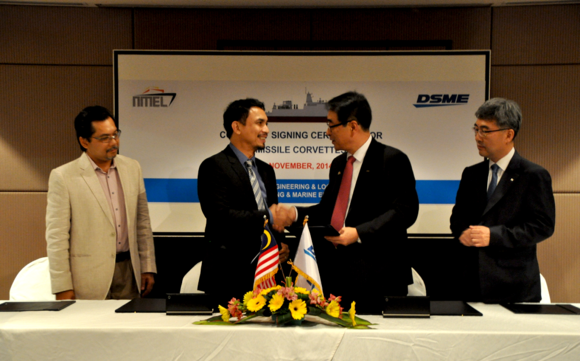 The deal will be finalized once the Malaysian government makes the final approval. (image:DSME)

The deal will be finalized once the Malaysian government makes the final approval. A corvette, a small lightly armed warship, is primarily used for coastal duty and has both attack and defense capabilities. The vessels DSME won lately are 85.0 meters in length, 12.9 meters in width, and 1,800 tons in weight.

Of the six boats, three will be built in the company’s Okpo Dockyard in Geoje Island and delivered sequentially from January 2018. The remaining three will be assembled in TanjongAgas Shipyard located in Pekan in the Malaysian state of Pahang after being delivered in the form of blocks for final assembly jointly with DSME engineers.

The close working relationship between Daewoo Shipbuilding and the Royal Malaysian Navy was instrumental in winning the latest deal. With the highest level of naval capabilities in Southeast Asia, Malaysia has consistently made a modernization effort for its Navy in preparation for upcoming conflicts that may occur in the Strait of Malacca.

The area is regarded as a choke point through which one quarter of the world’s traded goods including oil, manufactured goods, and commodities like coffee pass every year. Earlier in 2010, Daewoo Shipbuilding won two training vessel orders from the Malaysian Navy.

The company has since won several ship orders from the navies of the world, including three submarines from the Indonesian Ministry of Defense and Security in 2011 and warships from Britain, Norway, Thailand, and Bangladesh. Based on its technical prowess and building capability, Daewoo Shipbuilding is cementing its position in the global defense industry.