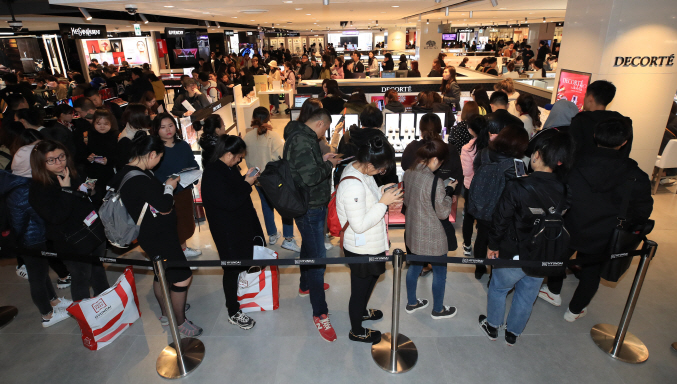 The Korea Tourism Organization said the number of Japanese visitors to South Korea came to 258,521 in December, up 33.5 percent on-year. (image: Yonhap)

Sales from Japanese consumers at a Lotte Duty Free shop in Seoul’s central shopping district of Myeongdong shot up 31 percent on-year in the first 20 days of January, the sources said. Overall, combined growth increased 15 percent posted over the cited period.

The two countries have been at odds as Japan claims a South Korean warship aimed its fire-control radar at its patrol aircraft last month, while South Korea says the ship was on a mission to rescue a North Korean ship drifting in the international waters of the East Sea.

Such a discord was earlier anticipated to weigh down South Korea’s tourism industry.

“It seems that foreign exchange factors, such as the strong Japanese yen, overwhelmed the Seoul-Tokyo tension,” an official from a local duty-free store said. “The number of Japanese consumers, as well as their purchases, both increased sharply.”

The Korea Tourism Organization said the number of Japanese visitors to South Korea came to 258,521 in December, up 33.5 percent on-year.

For all of 2018, Japanese visiting South Korea for tourism purposes increased 27.6 percent to 2.94 million, accounting for 19 percent of the country’s combined tourists.

“The number of Japanese visitors is also increasing,” another official from the local tourism industry said. “While the popularity of Korean entertainment content concentrated on middle-aged females in the past, it is now spreading to other generations, leading to the increase in the number.”