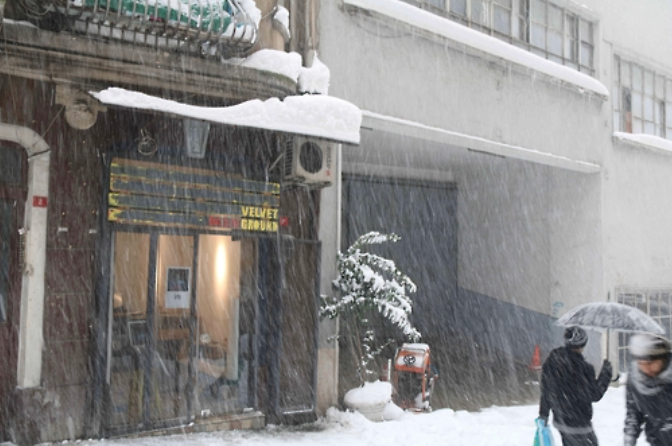 The title “Saddest Record Store in the World” was given by the German edition of Rolling Stone magazine, which included an interview with Lee in its October edition. (image: Yonhap)

The store figured prominently in the media after what an extreme Islamist attack on June 17 of last year, when a handful of Turkish individuals entered the premises, assaulted customers with metal and wooden clubs, and vandalized the property, condemning them for drinking during Ramadan. Customers had gathered at the time for a meet-up to listen to music by Radiohead.

The shop’s owner Lee Seok-woo tried to overcome the traumatizing experience, and decided to reopen the shop just 12 days following the incident. But seven months after the store re-opened, he decided to close it down permanently on January 14.

The title “Saddest Record Store in the World” was given by the German edition of Rolling Stone magazine, which included an interview with Lee in its October edition.

Velvet Indieground first opened in the summer of 2014 in a steep alley of Istanbul’s Cihangir neighborhood, home to mini galleries, craftwork shops, and trendy cafés. On the street at the bottom of the hill is the Museum of Innocence, established by Nobel Prize recipient novelist Orhan Pamuk.

The 30-square-meter shop sold LPs from artists and bands who were not particularly hit makers, but who certainly appealed to niche audiences, Lee said. Although business itself was disappointing, with Lee sometimes going a day without selling a record, it was a rewarding opportunity for people to come together and share their musical tastes, until the tragic night in June.

Ironically, none of the Turks who were involved in June’s assault faced punishment despite the incident attracting much public attention in Korea. President Recep Tayyip Erdoğan even defended the suspects, saying that the victims were equally responsible.

During an interview on January 15 with Yonhap News Agency, Lee said he never intended to make a fortune with his shop, denying that his decision to close it down for good was due to financial struggles.

According to Lee, his customers, who had become his close friends over the years, stopped coming to the store, and the place that was once filled with pleasant memories was now a reminder of a nightmare.

“Strangers would often drop by and talk about the incident,” he said. “I couldn’t stand how people thought of it as fun gossip, and it continuously reminded me of the terrible experience that still anguishes me.”