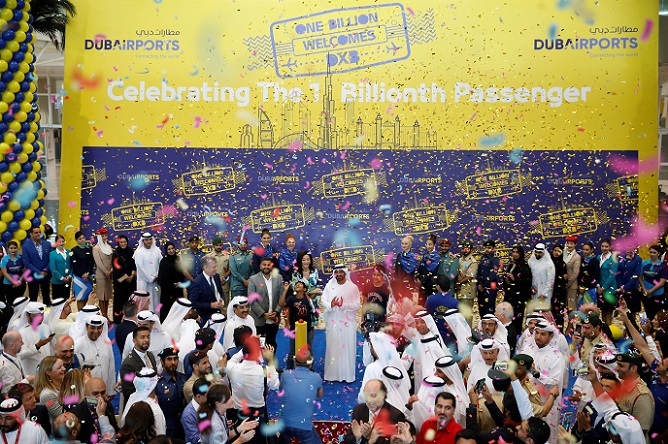 DUBAI, United Arab Emirates, Jan. 07 (Korea Bizwire) — Following the official announcement earlier today from HH Sheikh Mohammed bin Rashid Al Maktoum, Vice President & Prime Minister of the UAE and Ruler of Dubai, Dubai Airports and representatives from across the aviation sector and the emirate of Dubai gave the airport’s billionth warm welcome to nine-year-old Arjun and his family who arrived this morning from Orlando, Florida on Emirates flight EK220

At a celebration held in DXB earlier today, Arjun along with his mother Ramya, father Venkatesh and thirteen-year-old brother Varun, were personally greeted by HH Sheikh Ahmed bin Saeed Al Maktoum, Chairman of Dubai Airports and warmly welcomed on this, their first visit to Dubai. They were also delighted with details of an unforgettable and surprising set of experiences that showcase Dubai’s longstanding reputation for excitement, luxury and modern Arabic hospitality, organised for the next few days of their trip.

At the airport this afternoon, HH Sheikh Ahmed bin Saeed Al Maktoum, Chairman of Dubai Airports said; “This landmark billionth passenger achievement is the result of teamwork and collaboration, and special thanks goes out to each and every member of the airport community who have played a role in this journey.”

His Highness continued, “Of course, we would not be in this position if it weren’t for the visionary leadership of HH Sheikh Rashid bin Saeed Al Maktoum and HH Sheikh Mohammed bin Rashid Al Maktoum, Vice President & Prime Minister of the UAE and Ruler of Dubai, both of whom foresaw the development of Dubai into a global centre for trade, tourism and commerce enabled by a fast-growing and world-leading aviation sector with top-flight airport infrastructure.”

The billionth customer is arguably the most significant in a long litany of achievements since the airport first opened in September 30, 1960 with a tiny terminal building and a runway of compacted sand. Today the hub is widely considered a benchmark for its quality infrastructure, passenger and cargo volumes and high service levels despite unrelenting growth. DXB handles an average of 7.5 million customers every month and this year broke its own traffic record thrice with more than 8.3 million customers in a month.

Nothing puts DXB’s growth in perspective more than the fact that the airport took 51 years – from September 30, 1960 to December 31, 2011 – to reach its 500 millionth passenger but clocked the remaining 500 million in just seven years. Over the past 11 years alone Dubai Airports has opened seven major facilities with an investment of almost $12 billion. Five of those have been at DXB including Terminal 3, Concourses A, B, D and the complete refurbishment and expansion of Terminal 2.

To pick the lucky passenger, Dubai Airports used its passenger traffic forecast to narrow down the selection to a specific flight and approached Emirates to make a random selection.

During their stay, Arjun and his family will be visiting some of the top Dubai experiences and treated like superstars all the way. The family will stay at the iconic Atlantis Hotel and dine at the award-winning restaurants there and even spend a day exploring the Aquaventure water park. A visit to the tallest building in the world – the Burj Khalifa – for an access all areas tour, followed by a personal shopping experience at The Dubai Mall. Then a full day with Arabian Adventures exploring the more traditional side of Dubai, around the Al Fahidi Historical neighbourhood and then into the desert for a dune drive and sunset dinner.

Dubai Airports will be posting highlights of the family’s visit across its social media channels in the days to come.

Editors Notes
Dubai Airports manages the operation and development of both of Dubai’s airports – DXB and DWC.

As integrator, Dubai Airports works to balance the interests of all stakeholders to maintain aviation growth, protect operational resilience and ensure that service providers collaborate to provide a safe and secure service and improve the experience of our customers whilst maintaining a sustainable business.

Dubai Airport’s forecast team used forecasting tools to identify the day, time and flight which carried the one billionth passenger and randomly selected that passenger in conjunction with the operating airline.