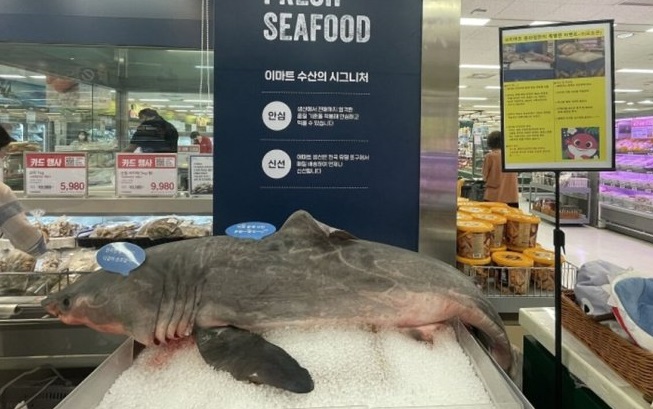 This photo from an online community shows a dead shark displayed at the E-Mart Yongsan branch.

SEOUL, Aug. 2 (Korea Bizwire) — A Seoul branch of discount chain E-Mart has sparked controversy after putting up a shark’s carcass for display in a “photo zone” event.

The E-Mart Yongsan branch in central Seoul recently showcased a dead shark in the seafood section for a “photo zone” event.

Customers who visited the store shared photos of the event on online communities, sparking controversy over animal abuse.

The picture shows a dead shark shedding blood over a pile of ice.

The controversy began after it was revealed that the shark wasn’t put up for sale, but used only for the photo zone event.

What’s more, the shark was placed next to a sign with recommendations on how to take a good photo.

“We set up a photo zone to display exotic marine species like rays, amberjacks and sunfish for an enjoyable customer experience,” E-Mart said as it apologized for the controversy.