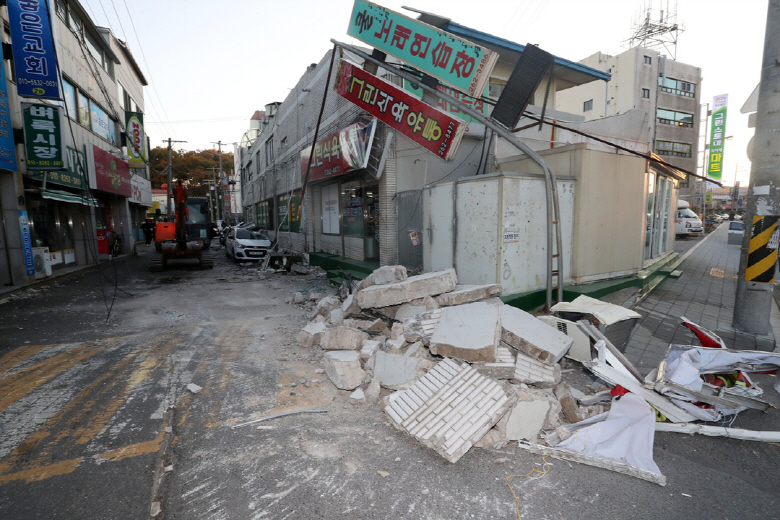 SEOUL, Nov. 16 (Korea Bizwire) — More than 1,500 residents have been left without homes and dozens are injured, with facility damage piling up after a magnitude 5.4 quake struck South Korea’s southeast a day earlier, authorities said Thursday.

The rare earthquake, second-strongest since 1978, hit north of the port city of Pohang on Wednesday afternoon. Tremors were felt as far as Seoul hundreds of kilometers away, with 41 aftershocks of up to magnitude 4.3 following, which continued until early Thursday morning, according to the state weather agency.

The tally of victims displaced from their homes and staying in emergency shelters set up in nearby indoor gyms reached 1,536 as of 6:00 a.m., the authorities said.

Fifty-seven people have sustained injuries, with two in critical condition and a dozen being treated at hospitals. The rest are stable and have returned home.

The authorities received nearly 1,200 calls reporting facility damage in the area. The bulk of them came from residential buildings, while others were from business districts and factories, as well as public infrastructure including schools, roads and railways. Most of them were about fissures, collapses and breakages.

The government will hold an emergency ministerial meeting, presided by Prime Minister Lee Nak-yon, with related agencies to discuss recovery efforts in the aftermath.

The Ministry of Education will carry out its own plans, including a thorough inspection of schools in the affected areas, and bolster efforts to ensure the rescheduled college entrance exam takes place without further trouble.

The education ministry announced late Wednesday that it put off the date of the state-administered college entrance exam for another week, the first time such a decision was ever made for the test due to a natural disaster. The test was due to be held nationwide Thursday.