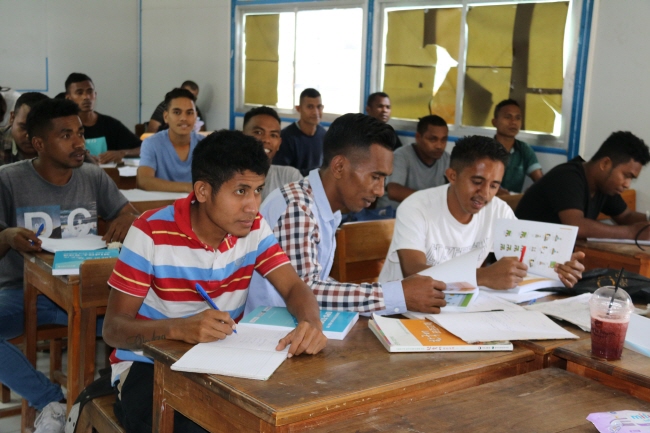 Since 2009, South Korea has been offering work opportunities to Timorese individuals who pass the Korean language proficiency test.

So far, a total of 3,200 Timorese have gone to South Korea for work.

The unemployment rate among younger generations in East Timor is 16.7 percent. Those who succeed in getting a job are paid an average of US$115 per month.

“The Korean language is sparking a sensation in the country after those who went to South Korea for work are coming back making lots of money,” said Song Myeong-geon, head of the student department at KSLP.

In East Timor, the Korean success story is so popular that if someone builds a well-made mansion, many believe that the money comes from working in South Korea.

Many East Timorese working in South Korea post videos about their lives, attracting others to work in the country.

The Korean language test takes place in East Timor once or twice per year depending on the demand from South Korean employers. If demand is high, the test is held as many as three times per year.

Only South Korea and Australia are known to offer official working opportunities to the East Timorese people.

Australia, however, only offers seasonal jobs, mostly during the farming season, so many East Timorese tend to prefer working in South Korea.

The East Timor Prime Minister’s Office said that it has accepted the proposal by Lee Chin-beom, South Korean Ambassador to East Timor, to establish an inter-ministerial task force for employment in South Korea.