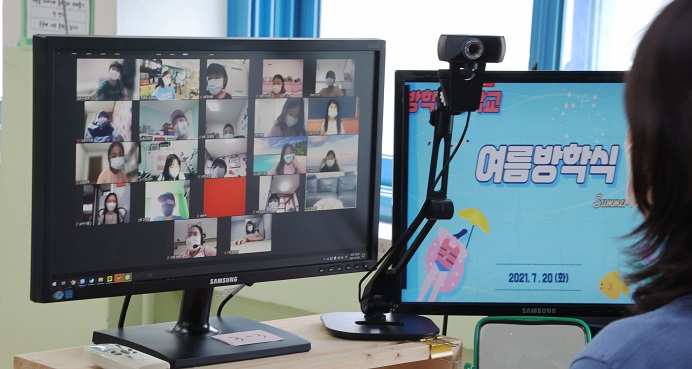 A teacher is engaged with students online at an elementary school in Seoul on July 20, 2021, in this file photo. (Yonhap)

SEOUL, Aug. 9 (Korea Bizwire) — The Ministry of Education announced a set of new relaxed social distancing guidelines in schools Monday to bring more children back into classrooms in the fall.

The ministry said it will allow schools to run in-person classes even under Level 4 distancing measures, the most stringent set of rules, as long as there are attendance caps to maintain social distancing among students in order to curb the spread of the coronavirus.

The cap varies depending on grades: It is set at half of the total student body from third to sixth graders in elementary school, two-thirds in middle school, and also half for first and second graders in high schools.

Kindergartens, first and second grades in elementary schools, and schools for disabled children will be exempt from the rules regardless of the severity of the pandemic, given the heightened need for in-person interactions for their development and education.

The decision, which came amid record-breaking virus infections nationwide in recent weeks, reflected a consensus among teachers and education officials that the pandemic widened inequities in learning and that in-person classes have benefits that outweigh infection risks among children.

Educational achievement research released in June showed that many South Korean students fell behind in Korean, math and English, in an indication of pandemic learning loss amid yearlong remote learning.

The measure also took into consideration that working parents find it increasingly burdensome and exhausting to juggle work and child care during the day, and fully opening schools is a crucial step toward economic recovery.

The ministry also highlighted that schools are a relatively safe place for children to be, citing statistics.

According to data provided by the ministry, infection cases averaged 26.5 per 100,000 people among the general population in March, and the figure was 17.9 for students.

In July, when the country began battling against the fourth wave of the pandemic, the figure was 81.1 versus 61.5.

Of the students who were infected with the virus, schools were found to be the least-cited places for contraction at 15.9 percent, while home was at 48.7 percent and the community at 22.6 percent. 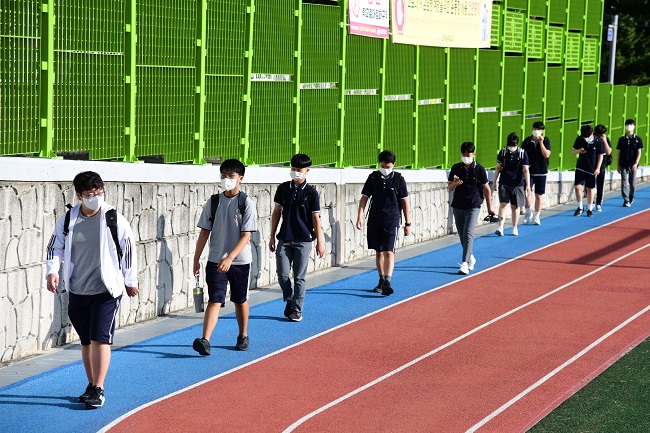 This photo provided by the education office in Jeju, an island off the southern coast of South Korea, shows middle school students on their way to school while social distancing on Aug. 2, 2021.

The ministry also cited increasing vaccinations among teachers and school officials as one of the reasons to support wider reopening of schools.

Currently high school seniors and teachers are receiving vaccinations, and the health authorities plan to fully inoculate them by early next month.

The wider capital area, which includes Seoul, Incheon and Gyeonggi Province, as well as Daejeon, a central city about 150 kilometers south of the capital, is currently under the Level 4 virus restrictions.

They originally enforced an outright ban on in-person learning at school.

The rest of the country is placed under the second-strongest virus restriction level, which requires the attendance cap to be placed at two-thirds or less of the total student body.

Under the relaxed rules, schools can resume in-person lessons full-time in Level 3 if virus transmissions in schools are considered to be manageable.

The ministry has been seeking to bring all students back into classrooms come September, out of concerns over a widening gap in educational achievements and the effects on children from a yearlong pandemic.

But its plan hit a major hurdle last month, as virus cases surged to record highs in the greater Seoul area, home to around half of the country’s population.

For around two weeks between the end of summer vacation — mostly Aug. 20 — and Sept. 6, the start of the second semester, schools are still allowed to hold in-person lessons in a limited fashion, regardless of the spread of the virus.