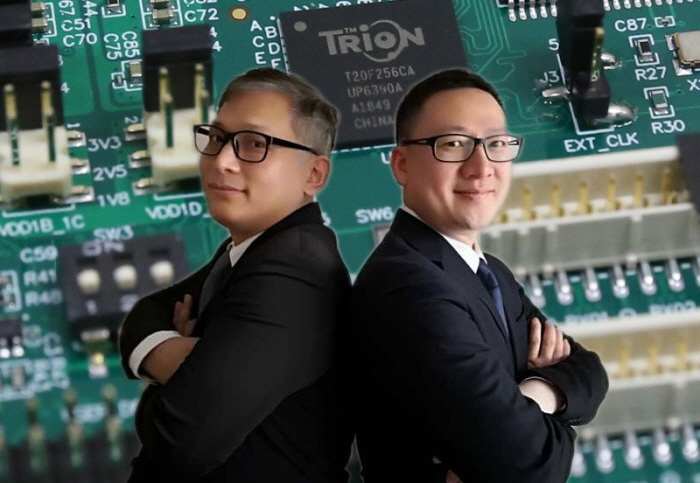 “Market reception to Trion T20 FPGAs around the world has been in a word – monumental,” said Ming Ng, SVP of operations and applications. “Driving the future of AI edge computing is our mission and volume production is a big step along that path.”

According to Jing Kuo, Efinix’s VP of sales and business development for China, during the past six months Efinix has engaged with more than 100 customers, “Trion FPGAs’ low power, small form factor, and the Efinity® Integrated Development Environment (IDE) are the critical reasons why customers are flocking to our technology.”

Kuo’s growing and sustainable Trion sales structure in China earned him a position on the Efinix executive leadership team. Previously, Kuo spent 13-years at Altera where he was a key contributor for the company’s success with Huawei in China.

Also joining the executive leadership team as VP of sales and business development is Itsu Wang, who is experiencing similar success with customer engagements. “Response and demand for Trion FPGAs across the rest of Asia, especially for the T20, mirror our success in China. We are fulfilling a need to deliver scalability and a reliable roadmap to our customers to help them continue their innovation.”

Wang’s responsibilities include Korea, Japan, Taiwan, Southeast Asia and North America West in his executive leadership position at Efinix. Most recently, Wang drove sales for QuickLogic in Asia and North America and has held senior positions at SiliconBlue Tehcnologies, acquired by Lattice Semiconductor, and Xilinx, an Efinix investor.

“Market excitement for the Trion FPGA platform is exploding for applications such as custom logic, compute acceleration, machine learning, and deep learning,” added Efinix’s Ng. “The tremendous work done over the past year by the Efinix team around the world has been met with strong customer demand. T20 FPGAs are just the beginning as we expand our product line with T120 samples.”

About Efinix
Efinix, an innovator in programmable products, drives the future of edge AI computing with its Trion™ FPGA platform. At the Trion FPGA’s core is Efinix’s disruptive Quantum™ FPGA technology which delivers a 4X Power-Performance-Area advantage over traditional FPGA technologies. Trion FPGAs, offering 4K to 200K logic elements, have a small form-factor, low-power, and are priced for high-volume production. Our Efinity® Integrated Development Environment provides a complete FPGA design suite from RTL to bitstream. With their Power-Performance-Area advantage, Trion FPGAs address applications such as custom logic, compute acceleration, machine learning and deep learning. Through Efinity, our customers can seamlessly migrate FPGA or full system into Quantum ASIC for ultra-high-volume production.

A photo accompanying this announcement is available at http://www.globenewswire.com/NewsRoom/AttachmentNg/81ad03ba-c30d-427c-b2a8-66d9f6c72d40