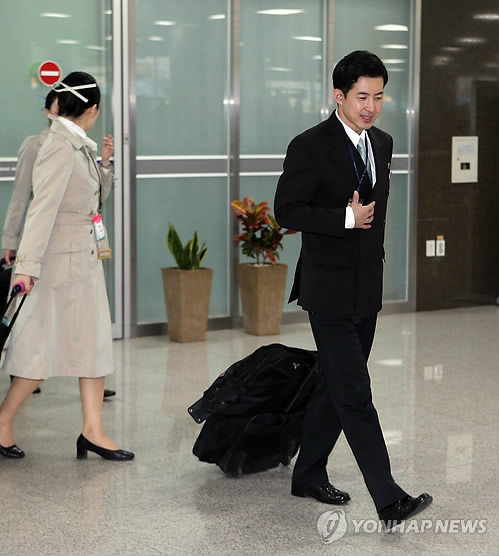 Park(right) said that his February work schedule was the toughest in his 18 year career in the company. (image: Yonhap)

SEOUL, Feb. 4 (Korea Bizwire) – The chief flight attendant who had to deplane from the Korean Air flight at New York’s JFK International Airport last December in the “nut rage” incident, is now experiencing a harsh work schedule, which is arousing suspicion that the company is seeking revenge against the crew.

Park Chang-jin, the purser of the KAL flight, who returned to work on February 1 after 50 days of sick leave following the incident, complained about his February work schedule calling it a “work schedule of hell.”

In his testimony at a trial on the incident held on February 3, in which the prosecutor sought a three-year jail term for former Korean Air vice-president Cho Hyun-ah, Park said that his February work schedule was the toughest in his 18 year career in the company.

His work flight schedule in February consisted mainly of domestic flights and short-haul international flights to Japan, China and Southeast Asia. Besides the short flights, there was only one flight to Rome, compared to previous work schedules where he often had at least three long-haul flights. As domestic and short-haul international flights return quickly, flight crews have little time to rest.

Park said the company has attempted to treat him differently from other workers, and that he is undergoing special monitoring. He claimed the company gave him the harsh schedule for February with an unusual number of early morning flights, implying revenge.

However, Korean Air refuted the notion that they were gaining revenge against Park, saying that the work schedules of its 6,000 flight attendants were set automatically by a computer program, and that it was unable of creating a man-made “harsh” schedule.