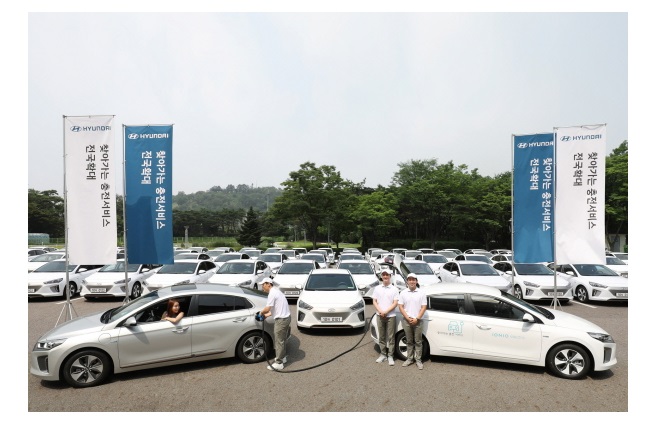 SEOUL, Jul. 21 (Korea Bizwire) — As the market for electric cars heats up, charging stations are springing up all over the country.

Everything moves fast in Korea and the growth of electric cars is no different. A country that had a mere 458 electric cars registered has seen that number explode by a factor of 35 in a mere five years. On July 13, the Ministry of Land, Infrastructure and Transport revealed that as of the first half of this year, the total number of registered electric cars was 15,869.

The expansion in electric car ownership has been encouraged by the government, which laid out a plan for 30 percent of all car sales by the year 2020 to consist of electric or eco-friendly vehicles. It will also institute a 50 percent discount in toll fares for electric cars starting in September.

Private companies have responded to the market changes in different ways. Leading automaker Hyundai has attempted to meet the demand for charging stations by implementing its existing electric car supply policy nationwide.

Until recently, the policy was only in effect on Jeju Island and in Seoul. Owners of Hyundai’s Ionic electric car in those areas could call for a service agent to come to their location and provide charging for free up to four times a year.

Hyundai further disclosed that to meet the increased demand of its service due to the expansion of its policy, it will increase the number of support vehicles from 10 to 60.

Traditionally unrelated retail giants are also getting into the mix. Home Plus currently operates 33 charging stations and plans to expand that number to 101 by year’s end.

E-Mart and Lotte Mart will both aggressively grow the scale of their operations as well. E-Mart signed an MOU with the Ministry of the Environment in 2011 and is known to be operating hundreds of charging stations. Lotte Mart is expected to add 100 stations to its current 31 stations by the end of this year.

The city of Daegu has not been shy about its ambitions to be the number one city for electric cars. To back that up, it recently opened a charging control center with 24-hour customer service for electric car owners. It has opened up 41 stations already, and is targeting a total of 384 chargers within the city by the end of 2017.