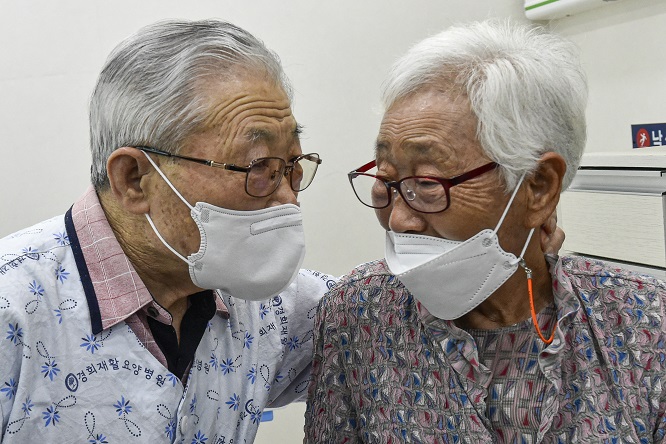 This pool photo shows Kim (R) and Lee, a married couple, meeting for the first time since the outbreak of COVID-19 at a long-term care hospital in Ansan, Gyeonggi Province, where Lee is a patient, on June 1, 2021. (Yonhap)

ANSAN, June 1 (Korea Bizwire) — At a long-term care hospital in this city just south of Seoul, an elderly woman in a pink-toned blouse sat on a bed stroking her husband’s face for the first time in 16 months.

“I couldn’t see you even if I wanted to,” the 87-year-old husband, surnamed Lee, said, as his eyes teared up.

“When you miss your love, look at her picture, and when you want to talk, grab a phone,” his 88-year-old wife, surnamed Kim, responded in song.

The emotional reunion took place on the first day the government relaxed social distancing rules as an incentive for those who have been vaccinated against COVID-19.

Under the new rules, in-person visits at nursing hospitals and long-term care hospitals are allowed if either the patient or the visitor has been fully vaccinated and two weeks have passed since the second dose.

In the case of the couple, Kim received her final dose of the Pfizer vaccine on April 30, while Lee had received his second AstraZeneca dose on May 24, less than two weeks ago.

“You must eat well, use the bathroom well and drink lots of water,” Kim said as she held her husband’s hand. “Don’t sleep during the day. Walk around and exercise. You’ll get sick if you sleep.”

When Lee, a man of few words, asked how she had been, Kim replied, “I miss you like crazy. I want to know (how you’re doing).”

The couple urged others to follow their lead and get vaccinated. They have seven children and 13 grandchildren and they miss all of them, every single one, Kim stressed.

“I realized that only by getting the shot would I be able to see my family and other people and live like before,” Lee said. 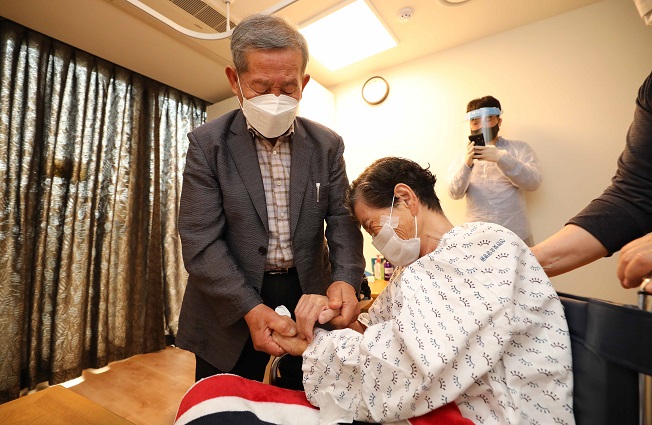 This pool photo shows Kim Chang-il (L) and his wife meeting for the first time since the outbreak of COVID-19 at a long-term care hospital in Gwangju, Gyeonggi Province, where the wife is a patient, on June 1, 2021. (Yonhap)

Kim admitted that at first, she felt sick and lost her appetite after getting the shot, but she felt fine after a day.

“When I was young, cholera killed off everyone. Back then, we didn’t have this kind of medicine, but now we do, so we can all live,” she said.

Not far off, in another long-term care hospital in Gwangju, Gyeonggi Province, a 77-year-old woman burst into tears at the first sight of her husband in over a year.

Kim said he could not sleep the night before because he was worried by the faint sound of his wife’s voice in a recent phone call.

Hospital workers expressed hope that their patients’ health will improve after seeing their loved ones again.

Many elderly patients have suffered from depression and insomnia due to the long absence of in-person visits, they said.