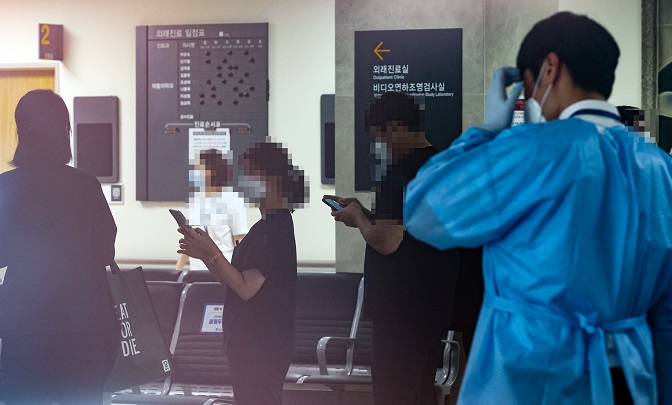 Workers at Severance Hospital in western Seoul stand in a line to receive new coronavirus tests on Sept. 10, 2020. (Yonhap)

The government will decide this week whether to extend tougher anti-virus measures in place in the greater Seoul area.

The country added 155 more COVID-19 cases, including 141 local infections, raising the total caseload to 21,743, according to the Korea Centers for Disease Control and Prevention (KCDC).

Thursday’s tally was nearly unchanged from the 156 cases reported Wednesday.

South Korea has been posting triple-digit infections for nearly a month since Aug. 14. The recent spike was mainly attributable to cases tied to a conservative church in northern Seoul and an anti-government rally held last month.

Helped by the country’s toughened social distancing measures, the number of daily new cases has been gradually falling after hitting 441 additional cases on Aug. 27, despite some ups and downs.

Health authorities said the latest outcomes are “positive,” but the country cannot lower its guard, as sporadic cluster infections have continued.

“We do not make decisions on the social distancing scheme based solely on the number of daily new cases. Rather, we also look into the proportion of untraceable cases, as well as the reproduction rates,” Yoon Tae-ho, a senior health official, said during a daily briefing.

The KCDC said the reproduction rate, which reflects the number of people that a single patient can infect, is currently staying below one nationwide, although the figure is subject to change on a daily basis.

South Korea will soon decide whether to again extend the enhanced social distancing scheme in the greater Seoul area, which is due to expire Sunday, by another week.

“It is still a relief that the number of new cases are below 200 for the eighth consecutive day,” Yoon said. “We will make the decision on the extension of the regime this week.”

Health authorities have said a daily increase of around 100 COVID-19 patients is considered a manageable level under the current medical capability.

Restaurants in the Seoul metropolitan area can operate normally from 5 a.m. to 9 p.m., but then can only offer takeout after that time. Franchise coffee chains, bakeries and ice cream parlors can only offer takeaway around the clock. 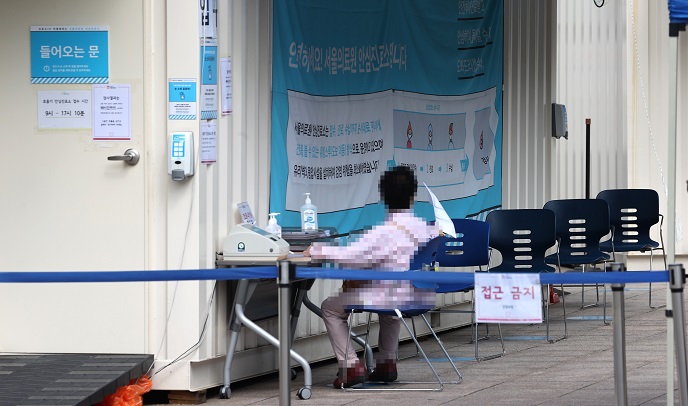 A visitor waits to receive a new coronavirus test at a makeshift clinic located in northern Seoul on Sept. 10, 2020. (Yonhap)

The measures were adopted amid concerns that a new wave of the pandemic in the densely populated capital area that houses around half of the country’s 51-million population would be much more catastrophic than the massive outbreak in Daegu in late February and early March.

More than 5,000 virus cases were traced to the minor religious sect of Shincheonji in Daegu, a city with around 2.5 million residents.

South Korea adopted what it calls the Level 2 social distancing scheme for other parts of the country in mid-August, under which indoor meetings of more than 50 people and open-air gatherings of over 100 people are banned.

This will run through Sept. 20, though it could be extended.

Data compiled by mobile carriers showed that people in greater Seoul moved 20.5 percent less during the weekend than a week earlier.

Of the newly identified local infections, 46 cases were reported in Seoul and 47 from Gyeonggi Province that surrounds the capital.

“We need to keep a more watchful eye on the situation, as the numbers from Seoul and Gyeonggi Province have not yet shown a clear sign of slowing down, although Incheon showed an outright downturn,” KCDC Deputy Director Kwon Joon-wook said.

Cases traced to Sarang Jeil Church in northern Seoul, a hotbed of the recent spike in new infections, stayed unchanged for a second day at 1,167.

Those tied to the anti-government rally in Seoul on Aug. 15 reached 557, up six from the previous day.

Other sporadic cluster infections continued throughout the nation.

A Buddhist facility located in western Seoul has reported 20 patients as of Thursday. A logistics center of e-commerce giant Coupang located in eastern Seoul reported one more patient, raising the related caseload to 13.

Severance Hospital, one of the major general hospitals in Seoul, also reported 10 patients.

Nursing hospitals appear to be emerging as one of places where concerns over cluster infections are growing.

Seven people, including patients and staff, tested positive for the virus at a nursing hospital in South Chungcheong Province on Thursday, health officials said. It is in addition to two people found to have been infected a day earlier. 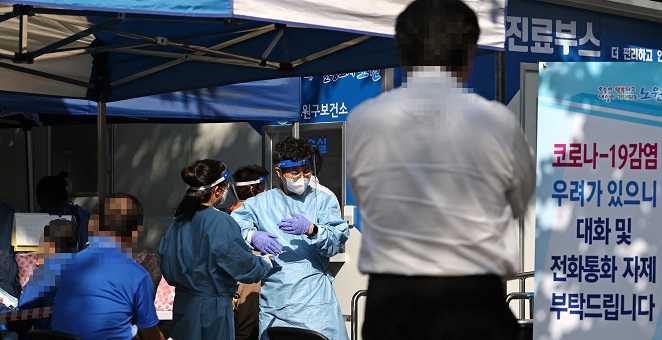 Residents stand in line to receive new coronavirus tests at a makeshift clinic in northern Seoul on Sept. 10, 2020. (Yonhap)

At another such hospital in Incheon, west of Seoul, two new cases were reported on Thursday, raising the total to four over the past two days. Local officials said that all of some 700 patients and workers there will be tested.

The proportion of patients with untraceable infection routes over the past two weeks came to 22.9 percent, according to the latest data, also straining the country’s virus fight. A whopping 39.3 percent were linked to cluster infections.

The number of patients in serious or critical condition came to 169, up 15 from the previous day. Health authorities are worried that the recent spike will lead to shortages in hospital beds, as well as more deaths, as most of them are seniors.

The KCDC said 23 percent of patients in such condition were aged 80 and above, while 40 percent of them were in their 70s.

South Korea is bracing itself for the Chuseok holiday, which runs from Sept. 30 to Oct. 4 this year. The Korean autumn harvest celebration is one of the country’s biggest traditional holidays and serves as a chance for family members to visit their hometowns.

Health authorities have advised that the reunions should be held virtually, otherwise new infections could surge.

The United States, Russia and Uzbekistan accounted for two cases each. There were also cases from Kenya, Australia, Japan and India. The accumulated number of imported cases reached 2,947.

A whopping 96.8 percent of the victims had underlying diseases. So far, there have been only 22 deaths among patients aged 59 and below.

The total number of people released from quarantine after making full recoveries stood at 17,360, up 337 from the previous day. Nearly 80 percent of the patients reported here were cured so far.