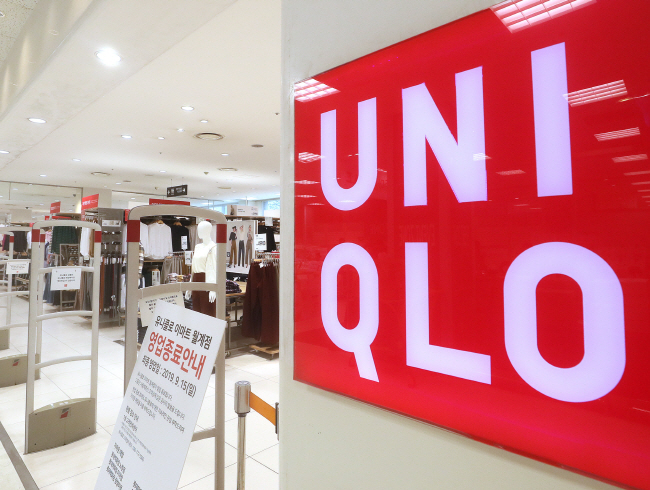 Uniqlo suffered from a precipitous drop in sales after the company was targeted by the boycott movement against Japanese products. (Yonhap)

Chief executive of FRL Korea, an operator of Uniqlo Korea, recently mentioned the term ‘restructuring’ in an email.

The email written by FRL Korea CEO Bae Woo-jin said that “the results of the board meeting have been reported to the president, who is interested in staff restructuring,” asking employees “to carry out as planned so that there are no setbacks in restructuring.”

The email also talked about relocating staff, when it mentioned the idea of ‘sending employees on rotations to the stores, which will leave the headquarters with a lower number of employees’.

The email was originally intended for the head of human resources only, but the CEO inadvertently sent out the email to all staff members.

FRL Korea made an official announcement on Tuesday, explaining that the email was a personal mistake, and that it had nothing to do with the restructuring of the company.

The email, nevertheless, has shocked all employees at Uniqlo Korea.

On top of rumors about restructuring already rampant among staff members ever since sales began to plunge, the email is leading staff members to become even more anxious.

“We’ve expected this since the number of customers began to drop since last summer, but it was still very upsetting to read it in the email,” one of the staff members said.

“It’s obvious. They’re thinking that cutting labor costs is the way to go.”

Uniqlo suffered from a precipitous drop in sales after the company was targeted by the boycott movement against Japanese products that came about in response to Japan’s export restrictions to South Korea in July of last year.

Coupled with this year’s coronavirus outbreak that has weighed heavily on the entire fashion industry, the company is expected to suffer even more.

For the first time since 2015, Uniqlo failed to achieve annual sales of 1 trillion won (US$824 million) last year.