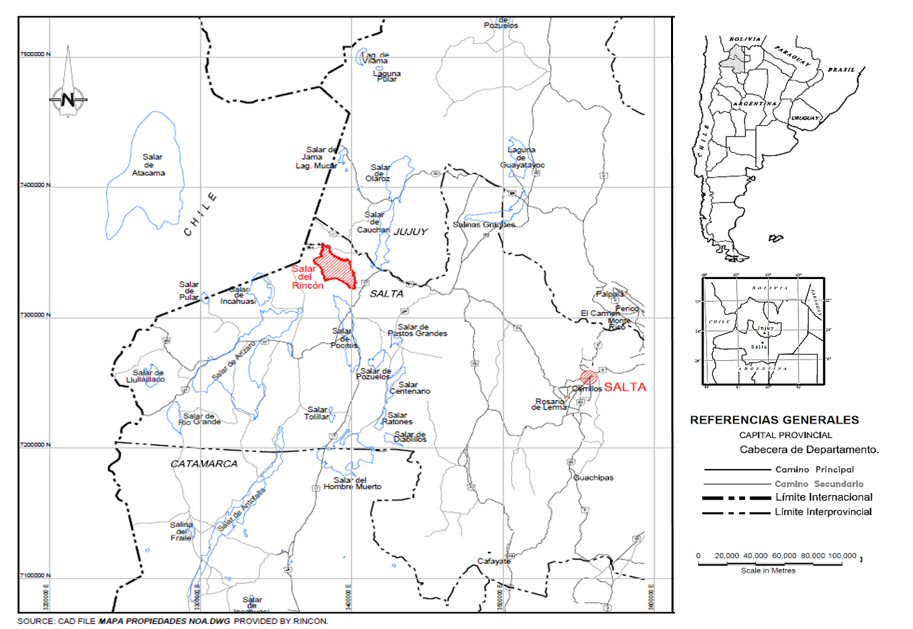 TORONTO, ON, Jul. 7 (Korea Bizwire) - Enirgi Group Corporation (“Enirgi Group” or the “Company”) is pleased to announce the positive results of its Definitive Feasibility Study (the “DFS”) for its planned 50,000 tonne per annum lithium carbonate processing plant at its Salar del Rincón development project located in the province of Salta, Argentina (the “Rincón Project”).

Enirgi Group retained SRK Consulting (U.S.), Inc. (“SRK”) to summarize the DFS in the form of a technical report prepared in accordance with National Instrument 43-101 - Standards of Disclosure for Mineral Projects (“NI 43-101″) of the Canadian Securities Administrators (the “2016 NI 43-101 Technical Report”).

The Rincón Project will utilize Enirgi Group’s proprietary lithium extraction technology. Raw brine will be extracted from the Salar through pumping from recovery wells strategically placed to maximize recovery of the resource within the Salar. Pumping rates, locations and area of influence for extraction wells were estimated based on hydrogeological parameters calculated for each geological formation based on field testing results and supported by simulation utilizing the Dynamic Model. Production well discharge varied from year to year, with an average rate of 1,450 litres per second and an average annual variation of +/- 98 litres per second.

The proposed plant will have the capacity to produce 50,000 tonnes LCE per annum. To achieve this, a brine containing approximately 350 to 500 milligrams per litre (“mg/L”) lithium will be pumped from a series of wells in the Salar to the process plant, where impurities are removed and the lithium is refined and converted to a lithium carbonate.

The technology enables lithium extraction from raw unconcentrated brine and returns the spent brine with a very similar elemental composition with the exception of lithium. This removes the need for brine concentration which is usually made via a large area pond system reducing the mining area footprint and environmental impact relative to conventional technologies.

The chemical processes main reagent inputs are cost-effective natural gas and limestone with the carbonate requirement needed for the end product being manufactured from carbon dioxide flue gases from the power station reducing carbon emissions to the environment. There are no large amounts of solid waste generated from the plant as all impurities remain in the spent brine, this attribute solves many scalability and environmental problems usually encountered with material handling and storage of these wastes at the mine site.

In the second half of 2015, the demonstration plant was disassembled and its modular parts were shipped from Sydney, Australia to the Salar del Rincón in Salta Province, Argentina. The Company is currently focused on continued work to support its goal of recommissioning and expanding the plant to test and demonstrate the full lithium extraction process and technology on site including finalizing the commercial plant design, commencement of detailed plant engineering, and engineering activities relating to gas supply and construction of a gas pipeline for the 50,000 tonne per annum Rincón Project.

In summary, Enirgi Group has completed various projects, assessments, detailed engineering studies, and process and technology testing to de-risk the Rincón Project in the areas of:

Note about Resource and Reserve Classification

SRK has used Sequence Stratigraphic Units (“SSUs”) to classify the Rincón Project mineral resource and mineral reserve estimate and as denoted in Tables 1 and 2 above. SSUs vary from each other by the abundance and stratigraphic continuity of lithologic units, hosting the brine resource which allows them to be correlated across the Salar. It also makes the assignment of an average porosity across each unit more meaningful for resource estimate. The static resource provides the initial conditions (time zero) for the Dynamic Model before pumping/migration of brine commences. The five SSUs are described as follows:

The upper fractured halite is the uppermost unit on the Salar and averages 16.2 meters thick with a range of depths from 0 to 30 meters. It is composed almost entirely (+98%) of halite (NaCl) that has been highly fractured and contains various volumes of dissolution cavities which are, for the most part, interconnected.

This unit occurs as wedges of mixed sands and clay beds, usually along the margins of the Salar, but sometimes extending well into the Salar as intermittent channels. These normally do not reach the central Salar area. The materials are primarily composed of weathered volcanics and contain a fair amount of clay, which gives them poor transmissivity and specific yield. The average thickness of this unit is 13.6 meters with variations from near 0 to about 20 meters.

This unit is similar to the above Clastic Unit, however it possesses a greater volume of un-fractured halite. The specific yield and hydraulic conductivity is also lower, as is the porosity. The clastic portion of this unit is similar to that of the above unit, with local sections containing slightly more clay fractions. The average thickness of this unit is 15.7 meters, with variations from less than 5 to 25 meters.

This unit is found universally across the Salar between depths of 40 meters to +/- 100 meters with an average thickness of 72.5 meters. The Black Sands SSU is thicker on the western portion of the Salar and thins eastward. Individual sand beds are typically observed to be 1 to 5 meters thick and interbedded with halite beds. However, on the western portion of the Salar, the Pure Black Sand beds can be as thick as 13 meters. A number of discrete layers of sand beds and halite are found within the Black Sands SSU, but are laterally discontinuous across the Salar, a thinning and transitioning into competent beds of halite. This has the effect of compartmentalizing Black Sand beds resulting in discrete areas of higher transmissivity separated by very low to non transmissive horizons.

The Massive Halite Unit makes up the largest volume of the entire Salar and is only classified as an inferred resource although there is interstitial brine within the unit. The porosity is measured at 0.018 (1.8%) and due to the depth, low transmissivity and total volume this unit is not economic at this time.

This news release contains forward-looking statements about the Company, the Rincón Project and its business. Forward looking statements are statements that are not historical facts and are based on certain assumptions relating, but not limited to: resource estimates, estimated NPV, anticipated IRR, anticipated mining and processing methods for the Rincón Project, the estimated economics of the Rincón Project, anticipated lithium recoveries, production and plant capacity rates, lithium grades, estimated capital costs, operating cash costs and total production costs, construction and supply of the necessary energy required, planned additional processing work and permitting. While the Company considers these assumptions to be reasonable, based on information currently available, they may prove to be incorrect. The forward-looking statements in this news release are subject to various risks, uncertainties and other factors that could cause the Company’s actual results or achievements to differ materially from those expressed in or implied by forward looking statements. These risks, uncertainties and other factors include, without limitation, risks related to uncertainty in the demand for lithium and pricing assumptions; uncertainties related to raising sufficient financing to fund the project in a timely manner and on acceptable terms; changes in planned work resulting from logistical, technical or other factors; the possibility that results of work will not fulfill expectations and realize the perceived potential of the Company’s properties; uncertainties involved in the estimation of lithium reserves and resources; the possibility that required permits may not be obtained on a timely manner or at all; the possibility that capital and operating costs may be higher than currently estimated and may preclude commercial development or render operations uneconomic; the possibility that the estimated recovery rates may not be achieved; risk of accidents, equipment breakdowns and labor disputes or other unanticipated difficulties or interruptions; the possibility of cost overruns or unanticipated expenses in the work program; and risks related to projected project economics, recovery rates, and estimated NPV and anticipated IRR and other factors.

Forward-looking statements are based on the beliefs, opinions and expectations of the Company’s management at the time they are made, and other than as required by applicable securities laws, the Company does not assume any obligation to update its forward-looking statements if those beliefs, opinions or expectations, or other circumstances, should change.