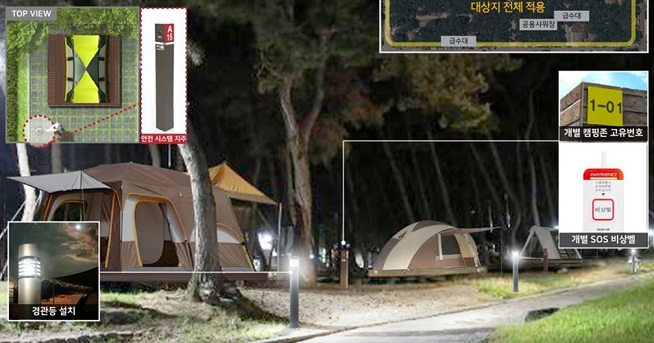 BORYEONG, Nov. 26 (Korea Bizwire) — With camping becoming increasingly popular among many respite seekers, cases of crime occurring in and around campgrounds are on the rise.

The city of Boryeong in South Chungcheong Province, where many popular vacation sites are located, has decided to use Crime Prevention Through Environmental Design (CPTED) programs to prevent crime to attract more visitors who prioritize safety when choosing where to spend their vacation.

CPTED is a multi-disciplinary approach of crime prevention that uses urban and architectural design, according to an explanation from the CPTED association.

Boryeong will make use of CPTED in and around Daecheon Beach, where a sprawling campground will be constructed by the end of next year.

A popular destination during the summer season and the biggest beach on the west coast of South Korea, Daecheon Beach has seen a growing number of crimes including theft and sex crimes.

As such, the city is pinning great hope on the benefits the program will bring about.

The implementation of CPTED at Daecheon Beach features safety zones to be equipped with high-end smart technologies.

A base space to control any emergencies arising at individual campsites will be established as well.

If an emergency bell in the tent zone is pressed, a monitor in the safety zone will display the exact spot of the tent with an emergency and the information will be delivered at once to the police and the CCTV Control Center for immediate intervention.

CPTED is not a new concept. The city of Seoul already introduced this program, and other local governments are replicating successful cases of design-induced crime prevention ideas.