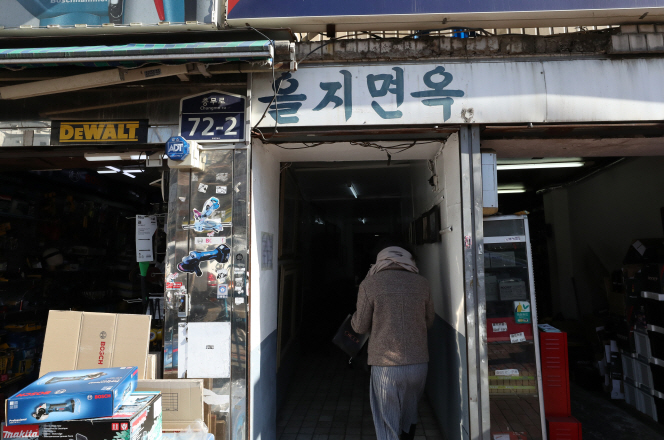 The exterior of Eulji Myeonok, one of the oldest restaurants in Seoul. (Yonhap)

SEOUL, Jan. 23 (Korea Bizwire) — Eulji Myeonok, one of the oldest cold noodle restaurants in Seoul, is likely to avoid scheduled demolition, as the city government has decided to seek ways to preserve it and other old restaurants located in an urban redevelopment area following public criticism.

“We’ve reached the conclusion that the ongoing Sewun redevelopment project, established in 2014, has been pushed while failing to properly reflect living heritage,” a city official said Wednesday.

The conclusion followed Seoul Mayor Park Won-soon’s remark during an interview with a local radio on Monday that the project has lacked consideration for old stores.

The city government will re-examine the project from the viewpoint of preserving old industry and restaurants in the Sewun district in downtown Seoul and map out comprehensive measures by the end of the year, the official said.

First of all, the city plans to seek ways to stop Eulji Myeonok and Yangmiok in the district’s 3rd Block from being demolished, in consultation with the Jung Ward government which has jurisdiction over them, the official said.

Eulji Myeonok, which opened in 1985, is famous for Pyongyang-style cold noodles. The restaurant became a hot place for gourmets especially after inter-Korean summit talks at the truce village of Pamunjom in April last year.

Meanwhile, the city’s Wednesday decision immediately reignited a controversy about the redevelopment project that has lasted for years.

Later in the day, the two sides in the debate held rallies at the same time at Seoul Square in front of Seoul City Hall right after the city announced the preservation idea.

In fact, 14 landowners in the redevelopment area, including Eulji Myeonok’s landlord, filed a suit with the Seoul Administrative Court against Jung Ward in July 2017 to have its approval of the project invalidated and are currently awaiting a decision.

On the other hand, landholders who support the project called for the city government to go ahead with it as scheduled during the rally.

They insist that facilities in the renewal area are so outdated that they pose serious safety and hygiene risks. Many stores in the area were built in the 1950s and 1960s.

Correction: In the previous text, there was an error in describing a Korean food of Yangdaechang which refers to the large intestines of cattle (or pig). We changed it as chitterlings (usually, the small intestines) given the expression is much widely adopted referring to that particular cuisine.

2 thoughts on “Eulji Myeonok Sure to Survive Urban Renewal Project”