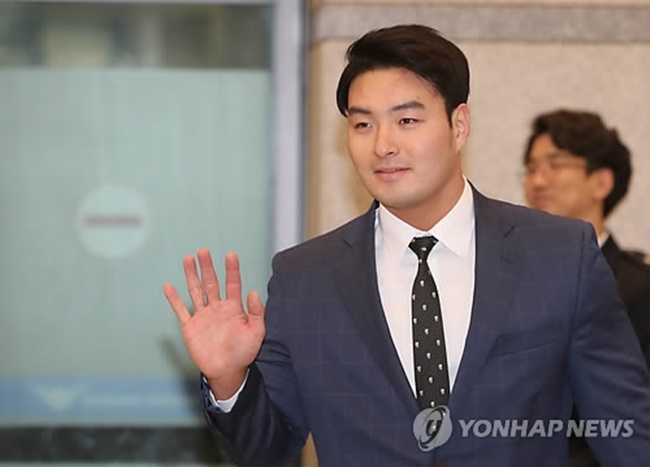 Park, 31, had spent five seasons with the Heroes before signing a four-year deal worth $12 million with the Twins in December 2015. (Image: Yonhap)

Park arrived home from the United States a little over a month after re-signing with the Nexen Heroes in the Korea Baseball Organization (KBO). After a brief and largely unsuccessful two-year stay in the Minnesota Twins organization, the two-time KBO regular season MVP agreed to a one-year deal worth 1.5 billion won (US$1.4 million) with the Heroes. Park will don his old No. 52.

Park, 31, had spent five seasons with the Heroes before signing a four-year deal worth $12 million with the Twins in December 2015.

Park, designated hitter and first baseman, played in 62 games for the Twins in his first big league season, hitting .191 with 12 home runs and 24 RBIs. He was demoted to Triple-A Rochester in midseason and never again returned to the majors. Park was removed from the Twins’ 40-man roster early in 2017 and spent the entire season in Triple-A, batting .253 with 14 home runs and 60 RBIs in 111 games.

Park had two years remaining on his Twins deal, with a club option in 2020 for $6.5 million or a $500,000 buyout. But Park asked the Twins to release him from the remainder of the contract and the club obliged.

The numbers Park put up in the majors paled in comparison to some gaudy stats he posted in the KBO, where he won regular MVP awards in 2012 and 2013.

Park is the only player in KBO history to lead the league in both home runs and RBIs in four consecutive seasons.

Park struggled to live up to expectations in the majors. He belted six home runs in his first 19 big league games, but his production quickly went downhill from there. His 2016 season ended prematurely due to a hand injury.

Despite batting .353 with six home runs and 13 RBIs in 19 spring training games in 2017, Park didn’t get the call to the majors that some felt he deserved.

He will now try to get his groove back in a familiar uniform.