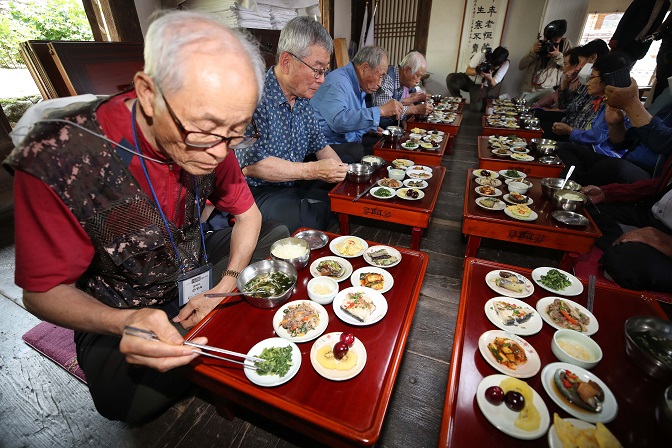 Vaccinated elderly people eat lunch at a table used by the upper class during the Joseon Dynasty at the Imcheonggak traditional house in Andong, North Gyeongsang Province. (Yonhap)

SEOUL, Aug. 9 (Korea Bizwire) — Elderly individuals over 65 years of age who have problems with chewing are about twice as likely to suffer from depression compared to other seniors who don’t have such problems, a study showed Sunday.

A joint research team from CHA Bundang Medical Center and Kunsan National University analyzed the correlation between chewing capability and depression for 3,747 elderly people who participated in the national health nutrition survey (2014, 2016, and 2018).

By asking about whether they felt uncomfortable chewing food due to problems with their teeth, dentures or gums, the research team divided the elderly subjects into two groups, one with such problems and the other without such problems.

The average age of the subjects was 72.7 years old, and 41.2 percent said they had experienced discomfort when chewing.

As a result of selecting those with depression by using the depression assessment tool PHQ-9 and evaluating the level of seriousness, the depression prevalence rate of the group with chewing problems was almost double that of the other group.

The elderly group with chewing problems saw a sharp decline in their overall amount of energy intake. Among various nutrients, the amount of protein intake turned out to have an impact on the depression risk.

The research team concluded that chewing problems not only weaken the pleasure of eating, but also aggravate the overall state of nutrition and lead to a drop in muscle mass resulting from a lower protein intake.