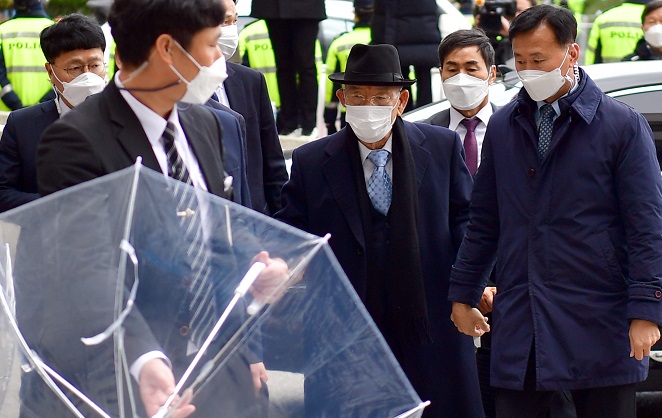 The Gwangju District Court endorsed the claims of late priest Cho Pius that there were shootings at civilians from helicopters during the 1980 Gwangju Uprising.

With the conviction, the court sentenced Chun to eight months in prison, suspended for two years.

The former president was also found guilty, and sentenced to death, in 1996 on mutiny and other charges.

The Supreme Court commuted the death sentence to life in prison. Chun was released in December 1997 on a presidential pardon.

Chun’s troops ruthlessly cracked down on the nine-day uprising which started on May 18, 1980, leaving more than 200 people dead and 1,800 others wounded, according to conservative official data.

During the sentencing, Judge Kim Jung-hoon said there were reasonable grounds to conclude that there were helicopter shootings on May 21 and 27, 1980, an issue that he called “historically very important.”

He continued, “Given the defendant’s position and his actions during the May 18 uprising, he must have been aware of the shootings from helicopters,” rejecting Chun’s consistent claims to the contrary.

The judge also said he had taken note of 16 eyewitness accounts of the aerial shootings, with eight of them, he said, being very trustworthy and backed by objective circumstantial evidence.

The biggest responsibility for the brutal crackdown falls on Chun, the judge said, urging that he should sincerely apologize for the suffering and pain he caused.

“However, because this trial is not a trial about the uprising itself, our decision was made from the standpoint of the violated rights and interests of the victims,” the judge added.

The 89-year-old was indicted in May 2018 for allegedly making slanderous statements toward Cho for making eyewitness accounts of the brutal crackdown in his controversial memoir published in 2017.

In the book, Chun refuted earlier claims made by the priest, who had testified to witnessing the aerial shootings against Gwangju citizens. Chun has insisted that Cho lied, calling him a “shameless liar”

As the crime of defaming the dead can be only acknowledged when it is proved that his or her honor is harmed with falsehood, Chun’s conviction practically means that the court concluded that Chun had knowingly denied there were shootings from helicopters. 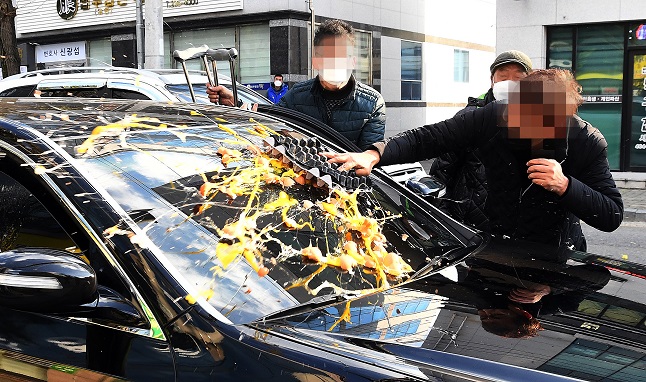 Angry activists throw eggs at a sedan of former President Chun Doo-hwan on Nov. 30, 2020, as he left the Gwangju District Court without apologizing after receiving a suspended eight-month prison sentence for defaming, in his memoir, the late priest Cho Pius, who had testified to witnessing the military shooting at citizens from helicopters during the 1980 Gwangju Uprising against the authoritarian government led by Chun. He used a different car. (Yonhap)

During his sentencing hearing, Chun, who is said to be suffering from Alzheimer’s disease, was seen nodding off from time to time.

Before he made a four-hour drive down to Gwangju, about 330 kilometers south of Seoul, to attend the trial in the morning, he was seen angrily shouting back at the activists gathered in front of his house in Seoul to demand he be held accountable for the brutal crackdown two decades ago.

Outside the courthouse, some 100 Gwangju citizens and activists, holding signs that said “Arrest Chun Doo-hwan,” urged the court to issue a heavy punishment for Chun.

A performance took place in the early winter cold, depicting a man in a cage wearing a prison uniform and a paper mask with Chun’s picture on it, to the applause of gathered people, including the families of victims.

“People apologize even for a minor car accident. How come Chun never says sorry for mass murder of innocent people?” said Kim Mal-ok, 62, who lost her husband during the government crackdown.

Priest Cho Young-dae, a nephew of the late priest who had filed the lawsuit, welcomed the verdict, but said the suspended term was too lenient for the pain Chun caused the people.

Chun left the court, escorted by bodyguards, without responding to questions.