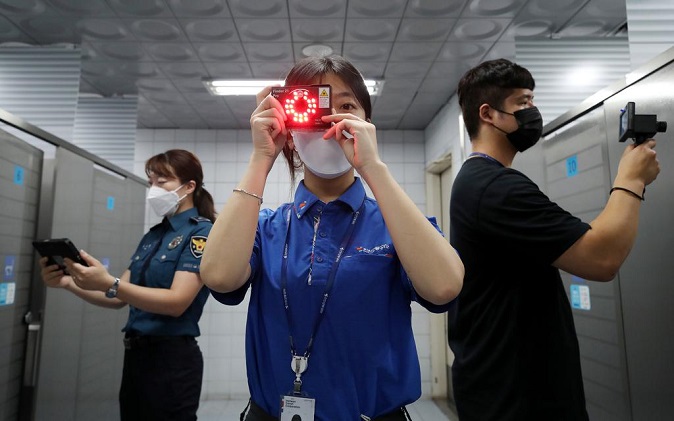 This file photo shows police officers using devices to check for hidden cameras in a public bathroom at a subway station in Incheon, about 40 kilometers west of Seoul, on Aug. 10, 2021, as part of a campaign to root out sex crimes. (Yonhap)

ANYANG, Feb. 18 (Korea Bizwire) — A former elementary school principal was sentenced to a two-year prison term Friday on charges of installing spy cameras inside the school, including a female teachers’ restroom, and secretly filming body parts.

The 57-year-old former principal at the school in Anyang, 23 kilometers south of Seoul, allegedly fitted a tiny camera inside a tissue box in the restroom in late October to secretly film women while serving as the school’s chief.

Charges against him also include putting a mobile phone under a meeting table with a camera on a total of 21 occasions between June and October last year and secretly filming teachers’ body parts.

A teacher spotted and reported the camera in the women’s restroom to the school. Police sent to the school later found several video clips of the victim’s body parts and still images on the principal’s mobile phone.

He has admitted to all charges in previous court hearings. He was dismissed from his seat by the provincial education office of Gyeonggi last year.

“The accused broke into a restroom and installed a camera to satisfy his sexual desire; the seriousness of this crime is not light,” a judge at a local court in Anyang said in the ruling.

“As the principal of a school, he betrayed the trust of teachers and students and even destroyed evidence to cover up his crime after it was exposed,” the judge also said.