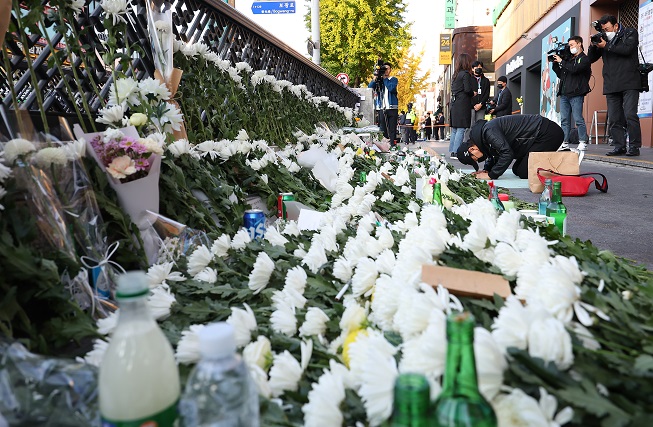 A person is on his knees near Itaewon Station in Seoul on Oct. 31, 2022, in mourning of the deadly Itaewon crowd crush two days ago. (Yonhap)

Mourning altars laden with white chrysanthemums also opened across the nation to allow people to burn incense and pay their respects to those killed in Saturday night’s crush that left at least 155 people, mostly in their 20s, killed and 30 others seriously injured.

President Yoon Suk-yeol was one of the first to pay tribute to the victims.

Dressed in black, Yoon and first lady Kim Keon-hee visited an altar set up at Seoul Plaza in front of City Hall, laid flowers and bowed their heads in silent prayer.

The tragedy happened Saturday night when a massive crowd of Halloween partygoers packed a narrow 3.2-meter-wide alley in Seoul’s entertainment district of Itaewon.

Some of them began to fall over, causing others to fall down like “dominoes” and pile up on one another.

It marked the deadliest crowd crush in South Korea’s history and the worst disaster the country has seen since 2014, when the ferry Sewol sank in waters off the south coast and killed 304 people, mostly high school students.

Two-thirds of the victims, or 103 people, were in their 20s, and 100 of those killed were women, due largely to what experts say is their relatively smaller frame and less muscle mass to resist crushing pressure. 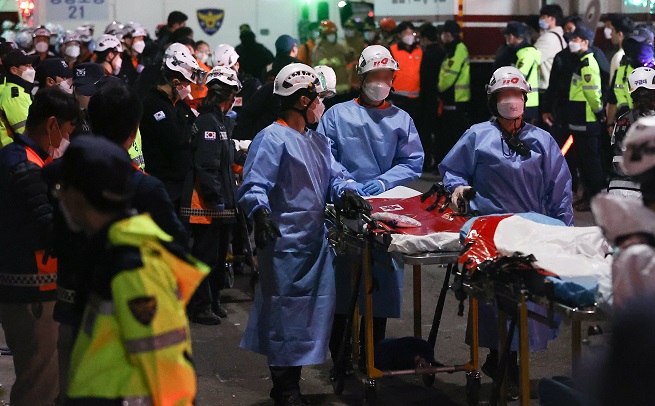 People began to lay flower bouquets, white mourning flowers and condolence gifts, such as candy and bottles of soju, near the accident scene in Itaewon on Sunday, and many visited the site to mourn and pay tribute to the victims.

“I came out to pray for the victims and their families,” a 29-year-old citizen, surnamed Yoon, told Yonhap News Agency after paying tribute in the neighborhood late Sunday. “I hope that people can find hope in the midst of despair.”

Following a long prayer in front of an alter set up at the provincial government building of Jeju Island, Kim So-hee, a 28-year-old Jeju government employee, said, “I am heartbroken as if one of my friends had died, because most of the victims were more or less my age.”

Many business owners in the Itaewon neighborhood, including restaurants, shoe stores and cafe operators, joined the mourning by putting up messages of condolences for the victims.

Many of them resolved to stay closed till the last day of the national mourning Saturday.

“We, merchants in Itaewon, have been enormously shocked and feel responsibility for the tragedy,” a bakery owner, surnamed Oh, told Yonhap News Agency, adding many are looking for other ways to mourn.

The bakery owner decided to join the business closure till Saturday, and provide free buns and coffee to police and rescue officials on duty in the neighborhood.

The 26 foreign victims include five from Iran, four each from China and Russia, two from the United States, two from Japan, and one each from France, Australia, Norway, Austria, Vietnam, Thailand, Kazakhstan, Uzbekistan, and Sri Lanka, officials said.

A total of 116 others sustained minor injuries.

In a disaster response meeting Monday, the government decided to provide 20 million won (US$14,010) in compensation to each of the dead victims on top of up to 15 million won of financial aid to cover funeral expenses.

Surviving victims will also be given compensation between 5-10 million won, according to the seriousness of the injuries they sustained, high-level interior ministry official Kim Sung-ho said.

The exact cause of the crowd crush is under investigation. Investigators from the National Forensic Service and police examined the site of the crush for about two hours on Monday.

During the forensic examination, which is aimed at figuring out why and how the crowd crush had unfolded, the investigators didn’t respond to reporters’ questions.

On Saturday night, tens of thousands of people were visiting the Itaewon area, known for its hip nightlife and chic restaurants, for the Halloween festivities without social distancing rules, including outdoor mask-wearing rules, in three years.

The site of the accident is a downhill back alley where about six adults can barely pass at a time.

Police said a special 475-member investigative team has interviewed 44 eyewitnesses and secured 54 pieces of surveillance camera footage from the crush scene to determine the cause of the deadly accident, and no criminally punishable acts have been detected so far. 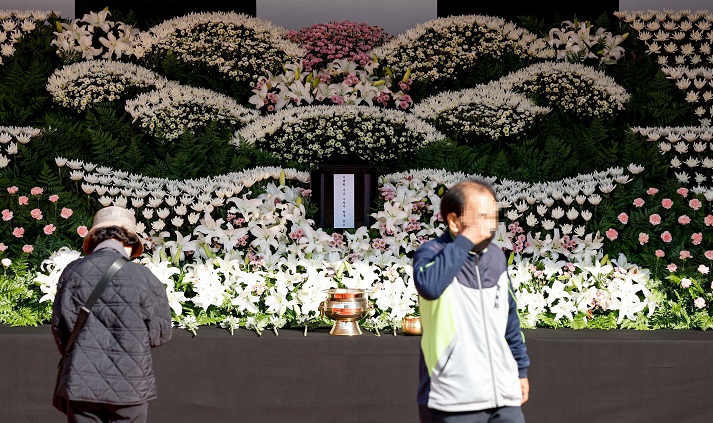 Citizens mourn the deadly Itaewon crowd crush at an altar at Seoul Plaza on Oct. 31, 2022. (Yonhap)

Critics have raised questions as to whether the disaster could have been prevented.

Some say the Seoul city government, the office of Yongsan Ward to which Itaewon belongs and police should have taken sufficient accident prevention measures in anticipation of a record Halloween crowd, whereas others say the disaster was beyond the realm of prediction.

A crowd of nearly 100,000 people was expected to flock to the nightlife district Saturday.

Many say there was a kind of prior warning signal, as eyewitness accounts have said on social media that some people were pushed by the crowd and fell in the same alley the previous night but were not injured after other people stopped moving.

Witnesses also said it was already difficult to walk around in Itaewon on Friday due to a huge crowd.

Despite the apparent warning signals, however, the Seoul city government did not seem to have taken any specific measures to avoid Halloween-related safety accidents in advance.

The Yongsan Ward office held an emergency meeting Thursday under the supervision of its deputy head to discuss Halloween-related safety measures for the Itaewon area, but the discussions were reportedly focused on COVID-19 quarantine measures, inspection of facilities and restaurant food safety.

The ward office said about 150 civil servants in 28 teams were deployed to Itaewon from Thursday to Saturday, but it seemed the manpower was not enough to cope with the tens of thousands of people.

The Seoul police also said they deployed about 200 officers to Itaewon on Saturday, though their tasks were mostly focused on cracking down on sex crimes, drugs and theft, instead of safety management.