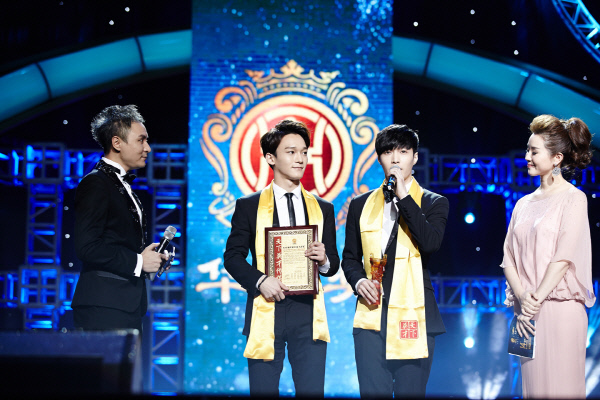 EXO has been awarded the honors of best musician, best album, best boy group and best Asian fashion star at the 2014 MAMA.

SEOUL, Jan. 11 (Korea Bizwire) – EXO was awarded the honor of the Best Global Idol Group at the 14th Annual Huading Awards in China on January 8. EXO-M members Chen and Lay attended the awards show to accept the honor.

The Huading Awards are one of the most prestigious music awards in China, and are sponsored by The National Emblem of the People’s Republic of China. EXO had a successful 2014, making a hit of its song ‘Overdose’ in both Korea and China.

EXO has been awarded the honors of best musician, best album, best boy group and best Asian fashion star at the 2014 MAMA. This is not the end of EXO’s long list of awards for its achievements in 2014. EXO also accepted the honor of Asia’s most loved group and the best performance at the 8th China Mobile Wireless Music Awards.

Chen and Lay gave the acceptance speech in Chinese, saying that they are honored to receive the prestigious award and they appreciate it with sincere hearts. They also said that they would always give their best to be deserving of the award title. They promised to continue to show their best performance in 2015.

Chen captivated the audience with a duet performance of “Breath” with Zhang Li Yin.

According to an online survey conducted by the Korea Creative Content Agency (KOCCA) of 1,540 male and female U.S. citizens, EXO was ranked second on a list of the most favored K-pop artists in 2014. BTS ranked first while VIXX, Winner and GOT7 followed.