SEOUL, Sept. 26 (Korea Bizwire) – K-pop boy group EXO’s Xiumin said Monday he is very much eager to resume group activities, as he was to drop his first album as a solo artist 10 years after his debut as an EXO member.

EXO was one of the most popular boy groups back in the early years of K-pop’s third generation.

Now with two of the nine members still enlisted in the military and two more set to enlist soon, it is expected to be a long time before EXO can be reunited as a group.

“I had taken a long hiatus as a singer,” the group’s oldest member answered when asked during an online press conference why he chose to go solo at this time.

“I had to fulfill my mandatory military service, and when I was discharged, other members went to the Army.”

He then decided to go solo as he craved to meet his fans again as a singer as early as possible. “Ultimately, I’d like to do group activities so badly,” he added.

The press conference to promote the EP, “Brand New,” was held a few hours before the album’s release at 6 p.m.

It has five tracks in which Xiumin reinterpreted the sentiment of music from the 1990s and early 2000s in his own style. They are the namesake title track, “How We Do,” “Feedback,” “Love Letter” and “Serenity.”

The title piece is an old-school vibe dance song with an addictive hook, and the lyrics wittily express a man’s promise to show his new and changed side for the one he loves.

Of the reasons for choosing the Y2K music style for the album, the vocalist-rapper said the period was when he listened to songs the most in his life.

“I still like the music style so much, so I wanted to make it new in my own style,” he added. 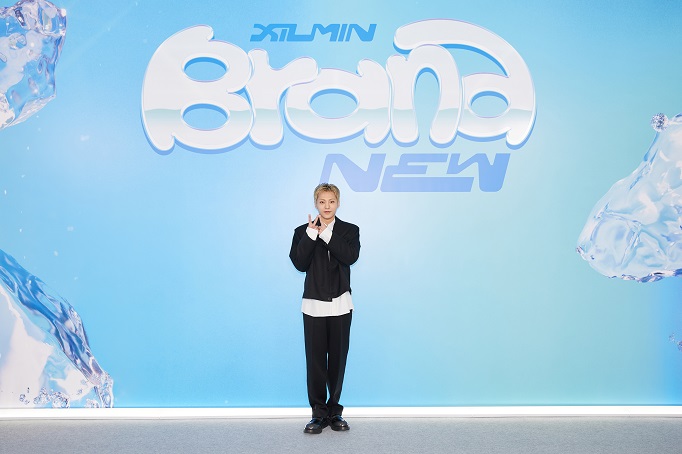 Xiumin, a member of K-pop boy group EXO, poses for the camera during an online press conference to promote his solo debut album, “Brand New,” on Sept. 26, 2022, in this photo provided by SM Entertainment.

When asked about the difference between the music from the Y2K period and today, he said he feels like the old music is for listening to with one’s mind.

“Music was relatively simple at that time and evoked a lot of emotions while it was easy to listen to,” he said.

“I think music these days is one that you listen to with your ears and is an upgraded one that requires a lot of information about it, at the same time.”

Xiumin debuted as an EXO member with its debut single, “Mama,” in 2012. EXO has then churned out many hit songs, such as “XOXO,” “Growl,” “Overdose” and “Call Me Baby.”

Despite his 10-year-long career as an EXO member, he confided he was not sure if he could stand alone without other bandmates and felt great responsibility for having to sing songs alone from beginning to end.

After a decade in the music industry, Xiumin now feels his bandmates are more precious than ever.