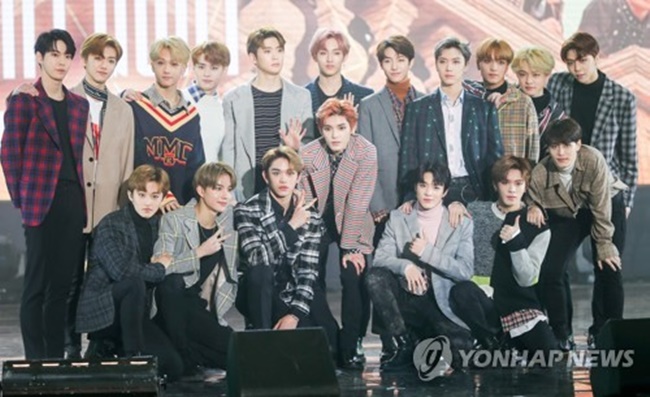 Boy band NCT pose for photos at a media showcase for its album, “NCT 2018 Empathy,” at Korea University’s Hwajung Gymnasium in Seoul on March 14, 2018. (Image: Yonhap)

NCT, an acronym for “Neo Culture Technology,” is S.M. Entertainment’s idol band project housing multiple groups under the single NCT brand. Currently, three Korean bands – NCT U, NCT 127 and NCT Dream — have been formed under the NCT umbrella launched in 2016.

The three NCT units, comprising 18 members, have collaborated in producing their first joint album. According to S.M., more than 200,000 copies have been pre-ordered.

“It’s an album filled with our hard work and passion. For us, expectations are high. I imagine we can become more approachable through the new release,” Doyoung told reporters at a media showcase held at Korea University’s Hwajung Gymnasium in Seoul.

Bringing together 18 singers to produce one single album is no simple task, as it involves thoughtful planning in the allocation of members according to track concepts and overall balance. The album holds 14 tracks, including “Boss” by NCT U, “GO” by NCT Dream and “Touch” by NCT 127.

“There were initial worries when we heard about the album,” member Mark said. “But after we started practicing, we learned that it could become a record that highlights NCT’s strength,” the singer added.

Members said they were aware that NCT could be a bit conceptually jarring at first. The group hope that the album will show newcomers to NCT what the group and its umbrella project are about.

“It will be a success in and of itself if fans are able to get a grasp of the concept and structure of NCT,” Doyoung said.