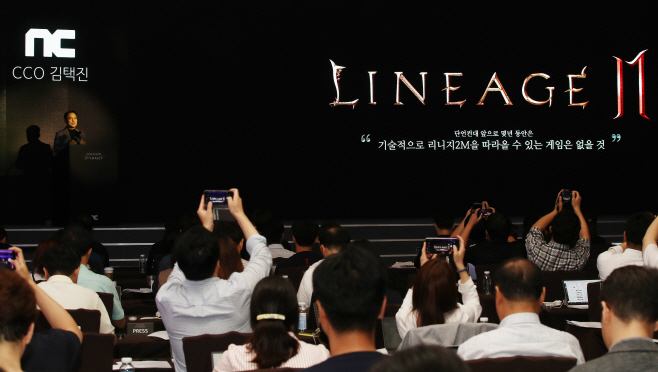 It is becoming more difficult to find South Korean developers in the North American and European markets where PC and console games hold a stronger presence. (Yonhap)

Google Play’s top sales in the first week of September showed that seven out of top ten games were MMORPGs.

IGAWorks, a South Korean marketing solutions company, reported that MMORPG games comprised 62.6 percent of all mobile game sales in first half of this year.

“The expansion of MMORPG games directly leads to the growth of South Korea’s gaming industry as they account for more than 60 percent of all game sales,” said Ahn Jae-min, a researcher at NH Investment & Securities Co.

Experts are raising concerns that the South Korean game industry’s infatuation with MMORPG games, thanks to their high profitability, is preventing them from developing new games with new genres, which many result in an overall decline in the industry’s competitiveness in the long run.

“The short lifespan of mobile games is leading many companies to hang onto MMORPGs for short-term profit,” said a source familiar with the gaming industry.

It is becoming more difficult to find South Korean developers in the North American and European markets where PC and console games hold a stronger presence.

Major South Korean developers were nowhere to be seen at this year’s E3, Tokyo Game Show, and Gamescom.

Experts are also concerned that Chinese developers may drive out local developers in the South Korean market as they gain a better reputation for making quality games.