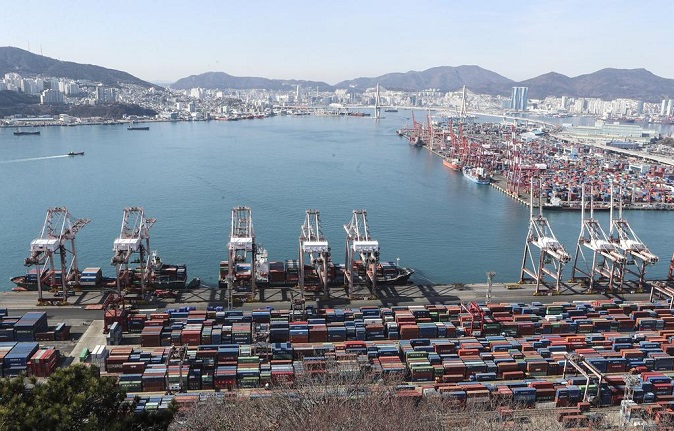 Containers are stacked up for outbound shipments at Gamman Pier in Busan on Jan. 21, 2022. According to provisional tallies by customs authorities, the country’s exports came in at US$34.4 billion during the first 20 days of the year, up 22 percent from a year before. (Yonhap)

Outbound shipments came to US$10.94 billion, surpassing the $10 billion mark for the first time ever, according to the data from the Ministry of Trade, Industry and Energy.

The growth is attributable to strong demand for electric and electronic goods, automotive chips, semiconductor-related products and COVID-19 items amid a global economic recovery, the ministry said.

South Korea operates 13 free trade zones across the country, including the western city of Incheon and the southeastern port city of Busan, to promote exports and foreign investment by offering eased regulations and other benefits.

A total of 1,152 domestic and foreign companies ran businesses there as of September 2021.

Their combined sales accounted for 1.7 percent of the country’s total exports last year, according to the data.

“The government will take steps to actively support exporters and to implement ways to innovate the operation of the zones,” a ministry official said.